There are two general types of 360 photos and videos, and it is important to understand the difference between them.

THE TWO TYPES OF 360 PHOTOS / VIDEOS:
360 cameras can take two broad categories of 360 photos and videos.  One type is an interactive 360-degree view where the viewer can change the view, either on a smartphone, or while using a VR headset.  Let’s call this “spherical.”  Example:

The other type presents the 360 photo or video in a non-interactive view.   Let’s call this the “flat” view.  It’s often called a “cropped” view because it is almost always only a portion of the entire 360 image, but because this type encompasses 360 photos presented as 360 equirectangular images (as in the photo at the beginning of this post), I think the word ‘flat’ is a more accurate term.  Example: 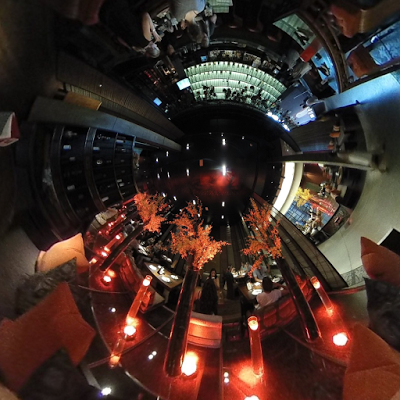 ​
WHY THE DIFFERENCE MATTERS
More than just a matter of preference, there are at least three important practical differences between these two types of 360 photos and videos:
Usage:  Flat 360 photos and videos can be viewed the same way as any other type of photo or video.  They therefore have the advantage of being universal.  Spherical 360 photos can be viewed on a smartphone with the right software, or a VR headset.  Because spherical 360 photos can be viewed on a VR headset where a viewer will see the image up close, it will require a higher resolution image, and there is less room for error.
Composition and subject matter: the types of subjects that can be used with each type of 360 photo differs.  Depending on which type you plan to create, there are different types of composition that would work.
For a flat 360 photo, a typical approach is to find an interesting pattern that would look striking as a tiny planet or rabbit hole.  You can find suitable subjects even somewhere as mundane as an office. 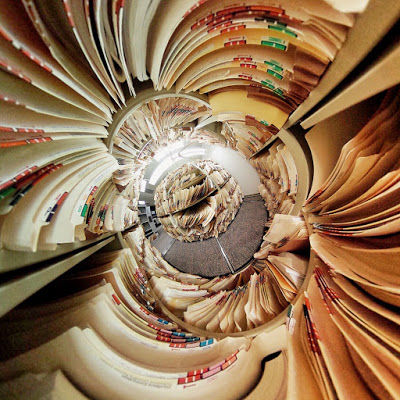 But that same technique won’t work for a spherical 360 photo (as you can imagine from a spherical version of the filing cabinets above).  Instead, with a spherical 360 photo, the viewer will be seeing the photo or video in 360, and you’ll need a reason for that.  Here are some ways to use a 360 view (see under “Applications” — note that some applications can work for either a flat photo or a spherical photo).
Virtual Reality.  I am pretty sure that for as long as people have an interest in beauty and art, flat 360 photos — including tiny planets and rabbit holes — will always have an audience.  However, I believe that as virtual reality becomes more popular and VR headsets become more common, there will be an increasing need for spherical 360 photos and videos.
I myself used to focus on flat 360 photos, as you can see from most photos and videos on my Instagram account.  At that time, I had tried Google Cardboard but I didn’t feel it was truly necessary to enjoy 360 photos and I believed that most people wouldn’t bother getting a viewer.
However, when I tried the Oculus Rift and Samsung Gear VR, I was blown away by the experience.  Indeed, almost everyone who tries a ‘real’ VR headset (not just Google Cardboard) comes away with the same sense of amazement.  If and when people buy a VR headset, they will need content for it, and in that regard, they will want spherical, not flat, 360 photos and videos.  Moreover, they will want the photos and videos to be in sufficiently high resolution and if possible in 3D 360 (e.g. from the Vuze camera).  If you have been taking flat 360 photos or videos, try out at least one of several VR headsets.  It just might change your view about 360 photos and videos.