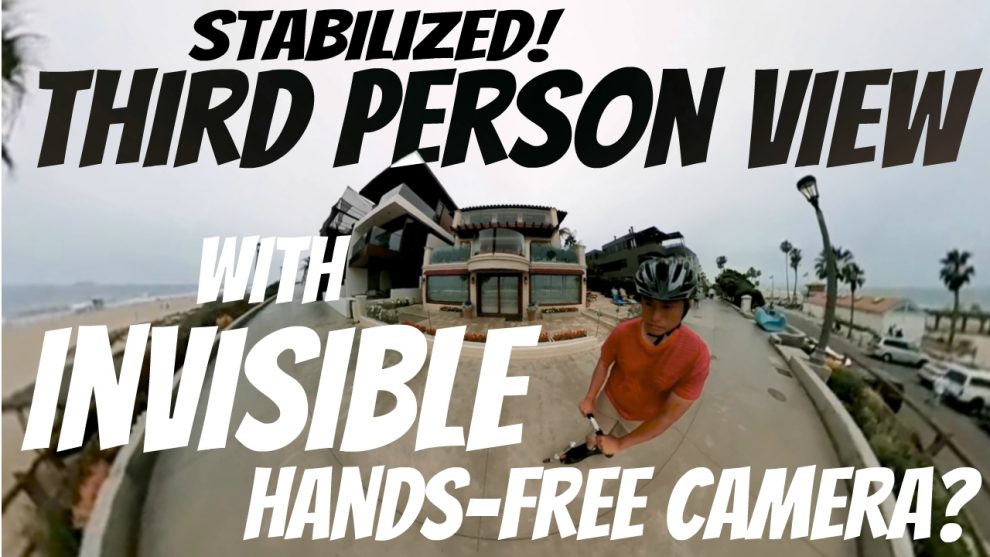 Check out this stabilized 360 video using a third person view mount that is hands-free and makes the camera invisible!

To create this video, I created a hands-free third person view mount.  I used the following:
1. a slim 360 camera.  In this case the Xiaomi Mi Sphere, which I chose because it is lightweight and has image stabilization.  It might also work with the Insta360 Air (Type C or Micro USB), Insta360 Nano, or Garmin Virb 360, all of which also have stabilization but they’re heavier (in the case of the Air and Nano, you need to attach your phone as well).  It might also work with the wearable kit from GimbalGuru.  You need to consider that if they’re at the end of a selfie stick, they will feel even heavier.
2. a selfie stick that is invisible even to a slim 360 camera.  In this case, I used a Benro MK10 because it is stiffer than my other selfie sticks, and because the handle is heavier than average, allowing it to act like a counterweight
3. a vented bike helmet.  I used this one because it’s cheap and it has a ratcheting headband to secure it to my head.
4. zip ties.

I simply attached the selfie stick to the helmet using zip ties, tightening them very well: 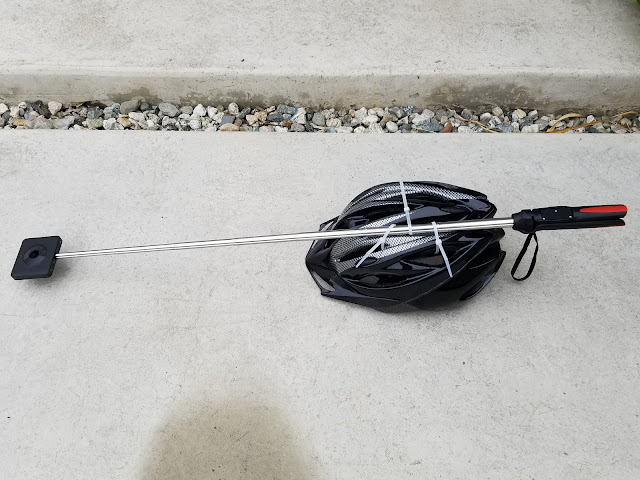 In any case, as you can see from the video, when used with the Xiaomi, the camera and selfie stick appear invisible while providing a pretty good third person view.  The Xiaomi’s stabilization also worked very well to keep the view stable even as I moved my head up and down and looked around.

[BTW I learned that the Xiaomi needs to be held vertically before and at the moment of recording or else the video will not be vertical even though it is stabilized.  If your video is stabilized but not vertical, don’t worry, I will post a tutorial for fixing that. Update: here is the tutorial]

With the Xiaomi attached, the helmet feels heavier in front, but it was not uncomfortable and I did not feel as if it hindered by enjoyment of my ride.

The main disadvantage of this system is that you have to use a helmet, which can appear unusual in some contexts, such as when I’m just walking.  In those situations, I plan to just use the Benro MK10 handheld (here’s how the video looks).

I really like how well this combination works.  It is easy to carry (when the Benro is collapsed), it’s lightweight, much cheaper than other third person view mounts and is pretty easy to use.  I like the combination so much that I’ve decided to leave my Benro on the helmet, and ordered another Benro MK10. 😀

How to remove chromatic aberration in 360 photos using Photoshop