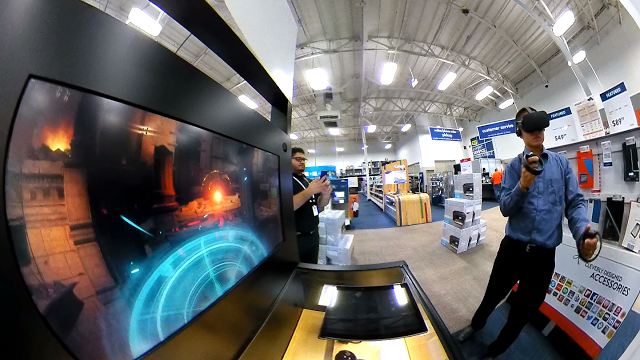 Yes you can use the Oculus Rift (reviewed here) and Oculus Touch (impressions here) to play games for the HTC Vive (reviewed here) but there had been some issues such as lack of haptic feedback and awkward button mapping.  Valve just rolled out an update to SteamVR Beta that resolved these issues, although other limits remain.

HAPTIC FEEDBACK
Previously, the Oculus Touch had less than ideal compatibility with HTC Vive games on Steam.  One of the limits was that there was no haptic feedback.  Haptic feedback is not just the simple rumble feature in many gamepads.  With both the HTC Vive and Oculus Touch, the vibration waveform could be programmed in 3D to simulate a variety of sensations, such as a realistic sensation of pulling a bowstring, which enhances the immersion in VR.  Unfortunately, this feature had not been implemented in Steam VR’s support for the Oculus Touch.  But with the update to Steam VR Beta, Oculus Touch will now also be able to use haptic feedback on Steam games for the HTC Vive.

IMPROVED BUTTON MAPPING
Another limit that has been addressed in the update to Steam VR Beta is an improved button mapping.  The Oculus Touch’s main buttons had previously been assigned to the menu buttons.  With the Steam VR Beta update, the enter button on the left Oculus Touch controller is now mapped to the system menu button, the A and X buttons are mapped to the A button (equivalent to clicking on the Vive touchpad), and the B and Y buttons are mapped to the App button (which usually brings up the in-game menu).

BUT LIMITS REMAIN
1.  Less than half of the Vive’s tracking area, even with 3 sensors.
The HTC Vive can track an area of up to 13 feet x 13 feet (169 square feet).  That’s pretty conservative, and in my experience, it’s actually significantly more.  Meanwhile, Oculus support documents show that the maximum tracking area is far smaller.  With two sensors, the tracking area is only up to 5 feet by 5 feet (25 square feet), or with three sensors, only up to 8.2 feet by 8.2 feet (67.24 square feet).  For some roomscale games, the Rift’s tracking area might not be adequate.  [When I get the Oculus Touch, I plan to test it out with roomscale games and will report back.]