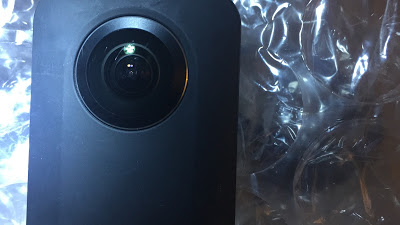 A scratch usually won’t affect the image quality of conventional lenses, but they will have a noticeable impact on 360 camera lenses.  This is because with conventional lenses, scratches will usually be too far out of focus to have an effect in the shot (unless there is a large area that is scratched).  However, with 360 cameras, the focal length is very short, and the depth of field (the area that appears to be in focus) is very deep.  As a result, a scratch in the front element will be much more visible in a 360 camera lens than in a conventional lens.

A recent personal example is when I scuffed my lens on my Theta.  The scuff was very light but it dropped the sharpness considerably.

This side doesn’t have as many scratches but it has several chips in the lens (they look like white spots), probably caused by small sharp rocks or pebbles.

Checking the lens is only one aspect of buying a used camera.  Besides checking for the camera’s operation, and for any damage to the body, also check if the camera is missing any of the original accessories, or whether it is gray market, which can impact its resale value.