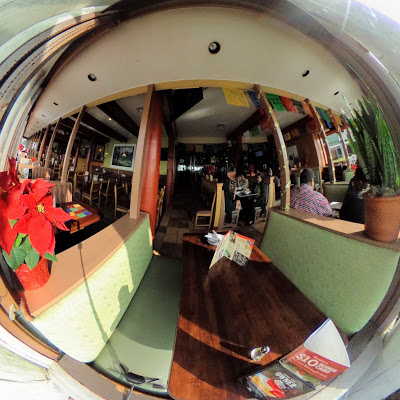 Sometimes, you don’t want to be shown in the shot.  Here’s how to hide yourself from your 360 camera.


360 cameras can see everything around them, which presents both an opportunity and a challenge.  You can capture the entire environment, but it also makes it harder for the photographer or videographer to avoid being seen in the camera.

To avoid being seen in the shot, you’ll need to use a self-timer or remote shutter.  First, put the 360 camera in the desired position.  Then find a place where you can hide from the camera.  Here’s the rule of thumb: if you can’t see the camera, then generally, the camera can’t see you. (Of course, obvious exceptions apply.)
Here’s a short video demonstrating this.

The technique applies to both 360 photos and videos.  In the shot below, I was about 4 feet away from the camera:


I was standing behind the red pillar and carefully positioned myself to avoid being seen.

If you’re shooting a video, you can do without a self-timer or remote shutter by simply trimming the portion of the footage where you are triggering the shutter.