360-degree cameras are still uncommon, and for most people shooting with it will be unfamiliar territory.  Moreover, some of the techniques for traditional photography, such as the rule of thirds, have no application to 360 photography.

The workflow for 360 photos is not as foreign as it may initially seem.  Here are the steps I use:

Simple/Mobile Editing
Here are the steps for quick editing on your smartphone:

1. VIEWING/SELECTING: Use your 360 camera’s app to view the photos and choose the ones you like.  When you find a photo you like, export it to your phone’s gallery / camera roll.

2. EDITING: From the gallery, you can edit the 360 photo using any app, including the phone’s built-in photo app.  The only limits are: you should not crop it, and you should avoid using the Clarity effect which can make the stitch line more obvious.  After editing, export the image.

3. SHARING: You can share the the edited image to several sites for sharing 360 photos such as Facebook, Spinnable (for iOS) or Kuula.co (web-based).

It is also possible to edit 360 photos within your normal Lightroom or Photoshop workflow.

1. IMPORTING: First, the 360 photos can be imported to your catalog as you would any other photo (in my case, I created a separate panorama folder in my catalog).

3. EDITING: The equirectangular panoramas can then be edited just like other photos but if you want it to be viewed as a 360 photo, just don’t crop it.   Also be careful about using the clarity slider, which can make the stitchline more obvious.

4. EXPORTING: After editing the photo, you need to export the image.  Unfortunately, Lightroom won’t preserve the 360 photosphere metadata needed for viewing the photos.  To add it back, use this tool.

5. SHARING: You can share the the exported image to several sites for sharing 360 photos such as Facebook, Spinnable (for iOS) or Kuula.co (web-based).

12 WAYS TO USE 360 PHOTOS
Now that you have an overview of how to view and edit your photos, let’s take a look at ideas for shooting with your 360 camera:

1. As a super-fisheye lens. Fisheye lenses have a very short focal length, an extremely wide angle, and exaggerated distortion. 360 cameras have those same features and therefore can be used in the same ways a fisheye lens can be used. See here for various applications of a fisheye lens.

In the shot below, I used a 360 camera to capture not just our lunch, but the surrounding area as well (actually even the wall “behind” the view here, although the wall is not shown in this crop). The wide angle gives additional context, and the subjects are framed by the Christmas decor on the edges, and the converging lines on the ceiling.

2. Immersive photo. By giving the audience a 360-degree view of a location or event, a 360 camera creates an immersive experience for your audience. This shot of a toy store doesn’t just give the viewer a view of the colorful toys but surrounds the viewer with them.

The immersive effect is even more powerful when a 360 photo is viewed on a VR headset such as the Samsung Gear VR (reviewed here).

3. Observer vs. participant. With a 360 photo, the viewer can be an active participant, not just a passive observer. I took the shot below while we were on a ride at Legoland theme park. As the viewer rotates the image around, they can get some sense of the thrill and vertigo from the ride.

4. Photo of a complementary pair. The Theta can take a photo of a pair of complementary subjects, such as a performer and the audience reaction, or any kind of action and the consequent reaction.  In the photo below, you can see the shooter, and the reaction from the target.

6. Group shots. When I take a photo of a group, especially during a meal, it’s not easy to get everyone in the picture, unless people go out of their way to stand up and pose as a group. A 360 camera is perfect for these occasions. In the shot below, I used a 360 camera to take a photo of a holiday lunch with my family.

7. Context for a subject. A 360 camera can show multiple points of view simultaneously, which can be used to capture not just the subject but another compositional element that can give context for the subject. In the shot below, I used a 360 camera to take a photo of my daughter at a balloon popping game at an amusement park. The Theta not only captures the focused expression on my daughter’s face, but the expectant expressions on the onlookers, the balloons to be popped, and the prizes being offered.

8. The Big Reveal. Because 360 photos can be interactive, you can select a point of view that builds up toward another point of view.

Some sharing sites have made it easier to use this technique by allowing you to specify the initial point of view. Sites that feature this include Facebook and Kuula.co.

9. Leading lines. The ultrawide angle of a 360 camera causes parallel lines to converge toward the center, and even perpendicular lines seem to radiate from the center, which can be used for a powerful effect.

10. Un-selfie. Selfies are ubiquitous but they can also be boring and can make the photographer seem self-absorbed. Images taken with a 360 camera can also include the photographer, so technically yes they are selfies, but there is so much more to the image than a photo of the photographer that the image appears less narcissistic. In the photo below at a Legoland concert, I used a 360 camera to capture the performers, the artificial snow, and the audience’s delight. Although I’m in the shot, the photo doesn’t give the impression of being a selfie.

12.  360-Specific Apps.  There are several apps that are uniquely suited for 360-photos.  For example, Rollworld allows you to morph your 360-degree photo, changing the point of view in seemingly impossible ways. 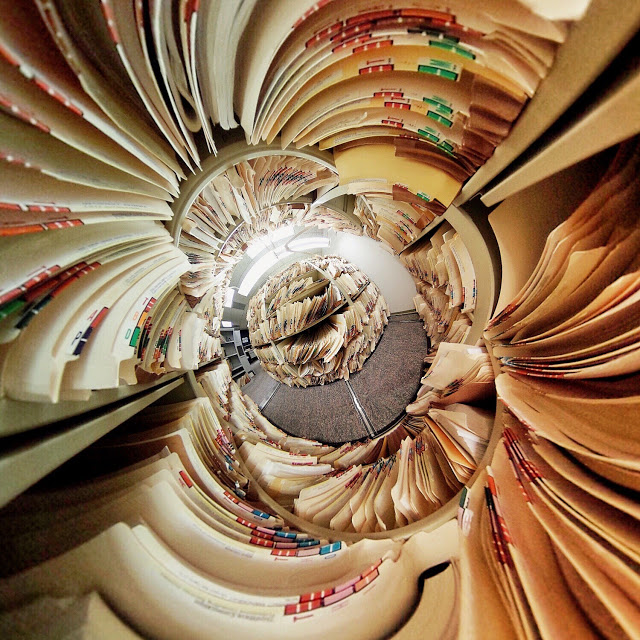 Using Rollworld and similar apps, you can also create animations from your 360 photos, such as this (posted on Instagram):

These are just a few of the many ways 360 photos can be used.  Got any ones that I haven’t covered?  Please post it in the comments!