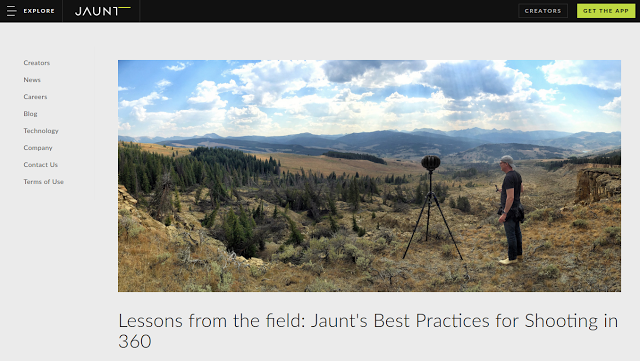 If you wanted a detailed primer to shooting in 360, and you want it for free, this is it.

Jaunt Studios posted a 56-page guide to the best practices for shooting in 360.  The guide is written agnostically for use with almost any 360 camera, not just Jaunt’s own Jaunt One camera.

The guide introduces fundamental concepts in 360 and VR, and explains the different types of 360 cameras and how they differ from each other.  It also discusses special cases such as using a 360 camera on a drone, or underwater.  It then discusses techniques such as setting up the shot, composing the shot, lighting, sound and post production.

Although the guide is written primarily for video, much of the information applies to 360 photos as well (with obvious exceptions).

The guide was written in September 2016, so some of the information about 360 cameras is outdated.  In particular, it says there are no stereoscopic fisheye cameras, and while that is technically true right now, there are several 3D 360 cameras that will soon be available, such as:

In addition, there are several 3D 360 cameras under development such as from Detu.

In any case, this is one of the better introductory guides I’ve seen for 360 photos and videos, and it’s written by experienced 360 videographers.   I highly recommend reading it.  You can download the guide from Jaunt’s blog here.

Caution: some chargers can damage the Ricoh Theta
Lanparte LA3D-VR 360 gimbal for Samsung Gear 360 and other 360 cameras
Comment