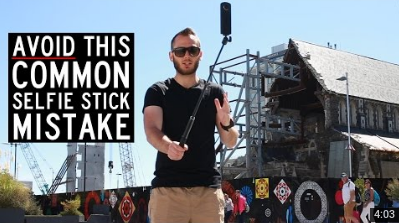 My friend Ben Claremont of Life in 360 shares an important technique for using selfie sticks for 360 photos and videos!

You can see a larger version of the video here.

For spherical videos (intended for viewing via a headset or a smartphone VR window), there are software that can correct the horizon such as Autopano Video, but they can be pricey.  (Incidentally, the Insta360 Air will include horizon correction for videos in its app, which is one of the reasons I like it.) Therefore, for spherical videos with cameras that don’t have horizon correction, I tend to keep the camera upright even though this will result in a visible selfie stick.

You can subscribe to Life in 360 on YouTube, where Ben shares many valuable information and techniques for 360 photos and videos.

New monopod with tripod base from Kodak Pixpro for SP360, Orbit360 and other 360 cameras
Insta360 Studio update adds automatic purple fringing correction plus other features
Comment