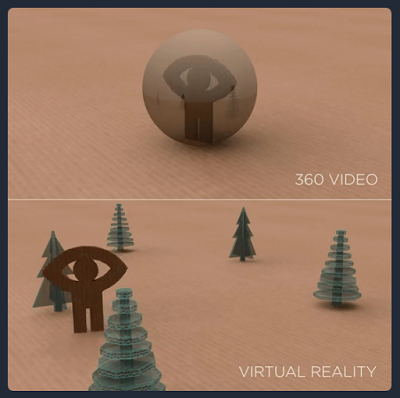 These days, people often use VR interchangeably with 360 video.  Sure, they are related concepts and both will allow you to look around, but they are quite different.   This short animation elegantly illustrates the difference.

You can also see the difference in Baobab Studio’s Invasion! which is available both as a VR experience (on Oculus Rift, HTC Vive and PSVR) and as a 360 video (on Samsung Gear VR, Jaunt, Vrideo, Samsung VR, and other platforms).  In the 360 video version, you can look around.  In the VR experience, you can look around, crouch, jump, move forward or backward, and in the case of the HTC Vive, walk around a bit.
Tags360 virtual reality vr