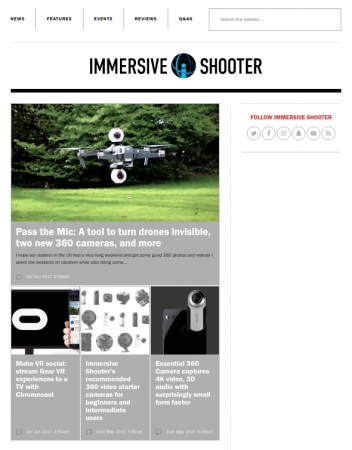 I just posted an article on Immersive Shooter, one of the best resources for immersive journalists and professionals who produce 360 video and VR content.   If you haven’t yet, you should check out Immersive Shooter.  Here are some of the stories that were posted this week:

– Robert Hernandez gives his top recommendations for 360 cameras for professionals and for consumers.
– Samsung Gear VR can now stream to Chromecast, not just Facebook.  This allows VR to be more social and lets your friends and family get an idea of what you’re seeing in Gear VR.
– Aryzon is an affordable Cardboard-inspired viewer for AR.  You can still sign up for their Kickstarter here, which has already blown past its funding goal.

These and more stories are on Immersive Shooter!  You can understand why I think anyone interested in 360 cameras should bookmark their page, and why we’ve teamed up!