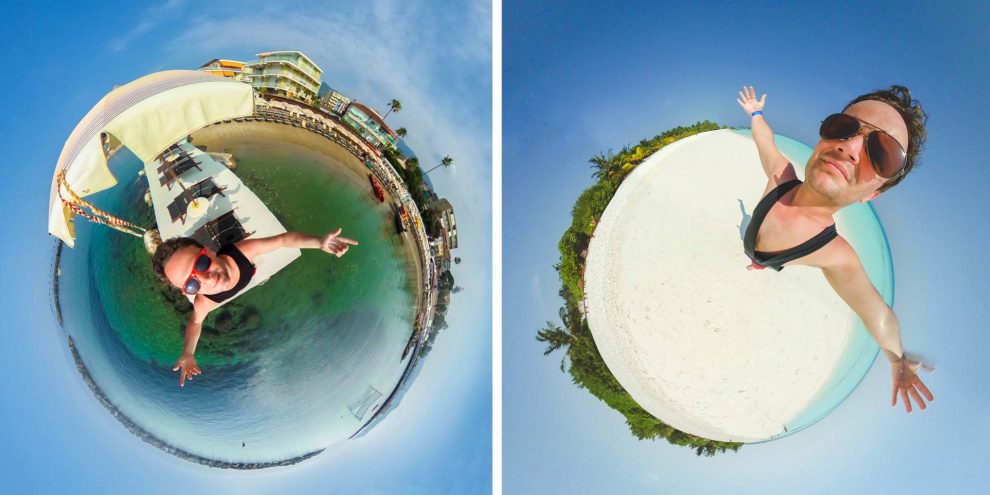 Shooting with traditional camera seems so simple during travelling: you’re just bringing one single camera with you. But in 360 you need tripods, monopods or any kind of camera stands, but these are a great amount of stuff for backpack travelers. Besides the weight of them, these accessories are quite big, so it’s hard to put them into your checked bag on board a plane. And it also causes embarrassing situation when we try to shoot on the beach among people in swimming dresses, with a flashy 360 setup.

Imagine 360 photography to be as simple as “traditional” photography, bring my camera and a tiny selfie stick with us. Let me show you some ideas to take handheld shots easily without further accessories in any situations during travelling.

360 travel photographers often shoot in a kind of selfie-style, putting the camera in front of them. It’s an easy way to take photos quickly in any situation, but in most of the times it doesn’t look so artistic, as the photographer appears on the image as an outsider. If you can’t avoid showing yourself in the picture, do it in a creative way. There are at least three interesting camera positions you can try:

– “flying cam”: setting free your hands, you can confuse other people, how and where the camera was fixed. You can shoot such images almost everywhere.

– “flying cam” through the window: holding the selfie stick straight forward in the window of your hotel room, it looks like a cool 360 drone shot. It’s a very creative way to take pictures of your accommodation with a handheld camera.

– “rearguard360”: stepping forward from the “flying cam”, you can take pictures just like there was an invisible photographer above or somewhere behind you.

If you don’t want to attract attention with “flying cam” and “rearguard360”, or you just simply want to shoot in various angles, you can still fix the image in post.

Shooting with a handheld camera the nadir goes onto your hand, as you’re holding the camera or a short selfie stick. In these cases the bottom of the photo you take is not the same as the bottom of the final image, so you can’t put a simple logo there to hide the “messes”, but you can try to add further objects.

The most obvious solution is adding an image of the camera itself. But only your imagination is the limit. Every single photo is another possibility to try something new, for instance to put an ice-cream in your hand in a nice summer scene.

This time post-production is not only about color grading, but we need to mask things out and even use the stamp tool in Photoshop. But as a reward, we can save a mediocre photo and bring it to a higher level.

Unfortunately not all of us have our computers along a trip, and multiple-layer editing is not available with smartphones. So sometimes we can retouch our images only later, after our journey. But luckily besides creative camera positions we have other weapons on the spot, choosing locations and finding the perfect camera placement there.

So choosing the “right locations” is not only about searching for a nice place to shoot. Almost every location has the potential to shoot a great 360 photo, but we have to find the perfect spot there, too. For instance we can play around with distances, getting closer or further away from certain objects, even trying to shoot asymmetrical images, which are quite rare among little planets. So that’s why they look really unique.

It requires some practice but after a while it’s getting easier. Anyway, if you are looking for a really nice and clear handheld shot, put your camera right above your head and then turn the image into inverted planets.

Put your camera on the top of our head or use selfie stick to put it even higher. Hold the camera straight, so after turning the 360 image into an inverted planet you will be totally invisible.

Of course you can put the camera on the ground, too, which looks very funny. But on summer, you can also play around with underwater shots, opening new dimensions. It’s really about choosing unusual and creative point of views.

As a summary, my advice is to try unusual camera positions, retouch a little bit to hide or correct defective areas in handheld shots, and try to find the right locations and adopt the appropriate techniques. That’s how you will manage to shoot in 360 without tripods and flashy accessories during traveling.  For more 360 camera tips, check out Gaba VR on YouTube, and on Instagram!

360 CAMERA BASICS: How to add or embed 360 photos and videos to your blog or website (in just 3 steps!)
Tutorial: How to remove the seam from edited 360 photos
Comment