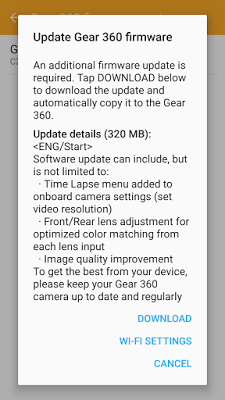 Samsung issued an update to the Samsung Gear 360 Manager with several improvements:

1. Added a Time Lapse menu to the camera, allowing you to change the resolution without the app.  Previously, there was no way to change any of the settings for the time lapse except with the Gear 360 Manager smartphone app.  Insofar as these changes would require a firmware update (not just an app update), I’m supposing this means the app will also update the firmware automatically.

3. “Image quality improvement.”  I’m not sure what the improvement is exactly, but I will take new samples to test this.

I’m working on a detailed review of the Samsung Gear 360, which I hope to post by tonight.  The review might not take into account the new changes.  I’ll just update the review when I’ve tested the changes.

Project Scorpio: a VR-ready edition of Xbox One
Experience VR for yourself with Playstation VR demos at Best Buy
Comment