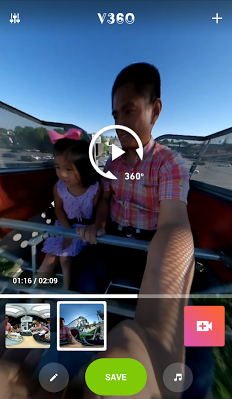 The first 360 video editing app for iOS will soon be available!

V360, the first 360 video editing app for Android, is coming soon to iOS.  V360 enables you to assemble a 360 video montage from individual 360 video clips.  You can trim each clip and add music (which will be mixed with the audio on your ).

I got the chance to try an alpha version (0.0.1) and the interface is just as familiar as it is for the Android version:
– you select individual 360 video clips that will be added to the montage
– you can edit each clip to trim it, rearrange, delete or add more clips
– you can add background music.  There are some royalty-free music that you can choose from (and they sound pretty good to my ears), or you can choose from your phone’s music library.
– you press save and voila, the 360 video is rendered, complete with 360 metadata, ready for upload to YouTube, Facebook, or other sites.

The app works intuitively, and there is no loss of image quality compared to the original videos.  V360 will be a very useful tool for 360 shooters on iOS!   I don’t have an ETA yet, but I will let you guys know as soon as I find out!   In the meantime, if you want to sign up for the iOS beta, check out getv360.com.