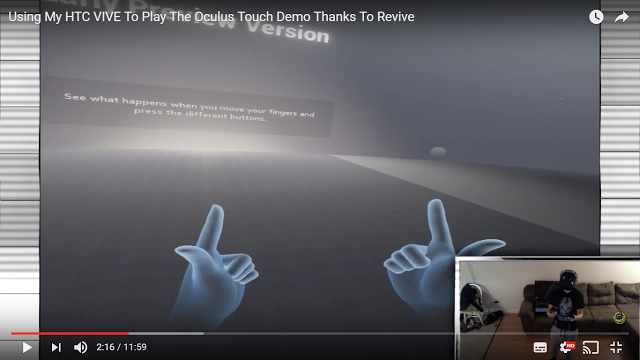 Man Vs VR posted a video on YouTube showing the HTC Vive controllers being used with an Oculus Touch app, and it shows the Vive being able to emulate the functions of the Touch controller, including finger tracking!

Oculus Rift games until this point used either an Xbox One controller or the Oculus Remote.  HTC Vive users could simply use the Vive wand controller to emulate the remote, and get an Xbox One or Xbox 360 controller for the games that use a gamepad.

Oculus is soon releasing the Oculus Touch, its motion controllers for the Rift, and one of the features of the Touch is to track your finger positions using capacitive sensors on most of the buttons and the top surface.  This raised a question about whether the Vive would continue to be able to use at least some of the Rift games that use the Touch controller.

Revive developer CrossVR said that the Vive would be able to run some Oculus Touch games, subject to compatibility with controls.  Well, apparently, the Vive controllers are actually able to emulate most if not all functions of the Touch controllers.  Check out the video by Man Vs VR:

I think this is a fantastic development because it brings the VR community closer to the vision of having the desktop VR systems being compatible with each others’ games, which I believe is best for the VR community because it allows developers to reach a wider audience.

For potential buyers still choosing between the Rift or Vive, the Oculus Touch does feel more natural than the Vive, although the Vive controllers have better tracking (much less likely to lose tracking from occlusion) and roomscale VR is easier and more convenient to implement with the Vive.  On the other hand, the Rift + Touch will be compatible with most, if not all games for the Vive, whereas the Vive is compatible with only some Rift games.  You can check out my comparison here.