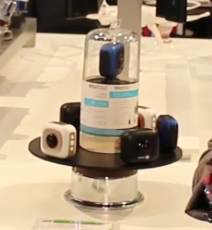 I don’t have info yet on the video resolution of the 1008HD although it would probably be 1080p just like the 1108HD.

Here is a video by Poc Network showing the 1008HD:

In the video, they called the camera the DVR1008.  I believe it is called the 1008HD based on the press release.

Thank you very much to Pepe Vazquez for bringing this to my attention!

Cyberlink adds 360 support to ActionDirector 2
You can do a 360 video call chat via Skype with Insta360 Air!
Comment