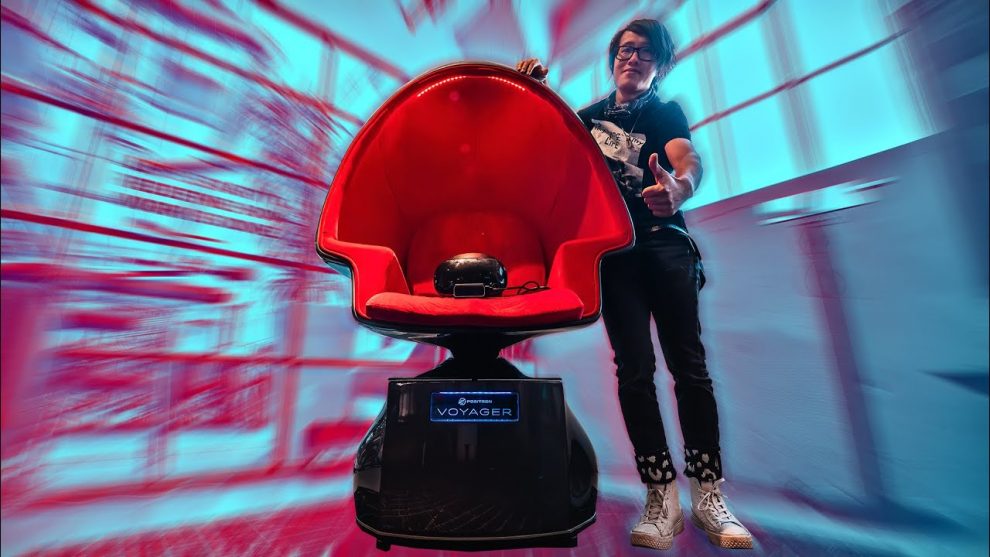 Could a chair eliminate VR-induced nausea?  That’s what the manufacturers of the Positron Voyager claim.  CreatorUp’s Hugh Hou tried it out:

VR experiences can induce nausea when there is an inconsistency between what you see in VR versus the motion that your inner ear senses.  For example, if you see a scene panning in a VR headset, while your body is not actually moving, your vestibular system gets confused because it senses no movement, but your eyes see movement.  This inconsistency can lead to nausea or a feeling of vertigo.

This is not so much an issue for 6DOF VR experiences but is a bigger issue for 3DOF VR headsets and VR experiences, including most 360 videos.  Occasionally, 360 videos will capture some movement, as for example when the camera is being moved or rotated.  Meanwhile, the viewer is most likely just sitting or standing in a stationary position, therefore the movement in the video leads to a feeling of discomfort.

The Positron Voyager addresses this issue.  It is a chair that looks like it came from a scene in Star Trek, and it can move in sync with what you see in VR.  The manufacturer claims that even a small movement in the chair is sufficient to avoid nausea for most people.  They claim that out of thousands who have tried the seats, all but two experienced no nausea.  This contrasts starkly with conventional VR, where nausea in 360 videos is experienced by as many as 20% of people.

They are so confident of their technology that in fact, they intentionally chose demo videos that have a lot of movement, such as flying videos, which normally trigger nausea in many people, even those who are experienced in VR.  And they’ve tested the chair with thousands of people with only two complaints of nausea, which is very reassuring.

It will be interesting to see how this technology trickles down to consumers.  Meanwhile, I hope to get to try their seat someday.   If you want to find out more, check out their official website.