VR-ES by Ucam CXK Inc. is a 360 camera rig that can operate in small spaces.

Most 360 camera rigs have a relatively large distance between their lenses, which results in more visible  parallax stitching errors, which are visible at smaller distances.  One camera rig that can be used in small spaces is the VR-ES. 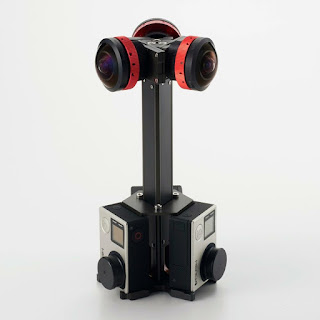 VR-ES uses three GoPro Hero4 cameras. each equipped with Entaniya 220 lenses for GoPro cameras.  To decrease the space between its lenses, VR-ES moves the sensor module and the custom lenses outside the camera.  The processors and batteries remain in the camera cases below the lens and sensor modules.

UCam Trident is an underwater 360 camera rig that can go 1,000 meters deep
Here are 7 features to expect from the Next Gear 360 (aka Gear 360 Pro) based on its new design
Comment