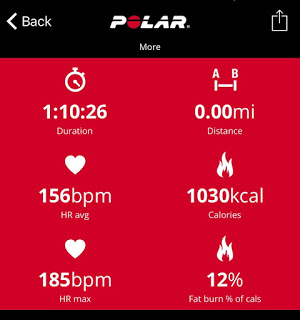 The other day, I did a post about how one man used his HTC Vive to lose 14.4 lbs. in 50 days.  I tried it myself to see if it’s real and as you can see from the numbers above (1030 kCal burned) it’s definitely real!

After trying Thrill of the Fight VR, a boxing game for the HTC Vive (reviewed here), which left me exhausted, I had suspected that you really can use VR for fitness.  However, I didn’t really know to what extent.

I joined /u/LepperMessiah1’s VR Fitness group on myfitnesspal.com and as he and others suggested, I got a chest heart rate monitor, the Polar H7 – to measure the calories I burn.

I have tried using the Samsung S6’s built-in pulsemeter to measure my pulse after using Thrill of the Fight but I wasn’t sure if it’s accurate.  The Polar H7 is more accurate and can connect with your smartphone to record your heart rate and keep a diary for you.  I thought the Polar H7’s realtime feedback plus recordkeeping would give me an objective measurement of how well I’m doing so that I don’t slack off.  Fortunately, it actually costs less than some fitness watches.

It turns out that VR was a better exercise than I expected, with the numbers to prove it. 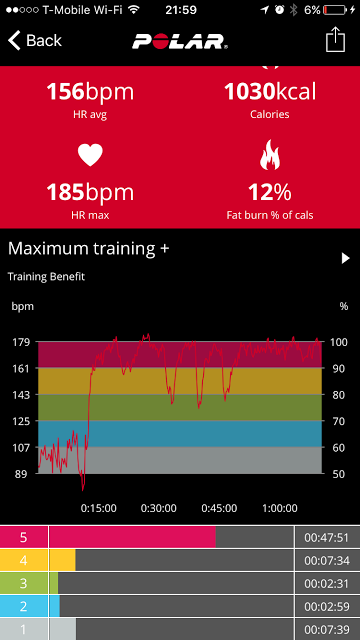 As you can see from the graph, Thrill of the Fight VR was so intense that it kept me very close to my maximum heart rate almost all of the time (the red zone).  (The first 15 minutes was me setting up the HTC Vive 🙂 ).  The dips into the yellow and green zone were those times when I paused to drink some water.

But there are some qualifiers and caveats to using VR for fitness:
– First, obviously, not all games / apps can give you a good workout.  Thrill of the Fight VR is the one that I found to be most intense.  Other people including Leppermessiah have suggested Sword Master VR, but I didn’t like it because of the unrealistic gameplay (similar to the Nintendo Wii) and more importantly, it didn’t seem strenuous at all.  It literally felt like a walk in the park.  Another possibility is Bitslap, on 20% sale right now, but I haven’t tried it.
– Second, it matters how you play the game.  With Thrill of the Fight, when I fought with a counterpunching style (waiting to counter-attack), I didn’t burn as much calories – my heart rate was 160 to 165 bpm.  It was when I used a swarming style (high volume punching) where my heart rate soared to 180 bpm.
– Third, if you’re planning to lose weight, the greatest impact on losing weight is your diet, not exercise.  However, regardless of whether you lose weight, exercise will make you more fit, and can improve your cardiovascular health.

I’m really encouraged by these results and am even more pleased with the HTC Vive.  I’m curious to see the results after a few weeks.