There are literally hundreds of VR games available on the Steam store for HTC Vive and Oculus Rift.  While many (or even a majority) are not worth playing, there are some excellent games that have escaped the notice of users.  In this series of posts, I’d like to highlight some very good games I’ve tried that are not very well known (yet).

Holo Impact: Prologue (HTC Vive; Oculus Touch).  This is a super awesome shooter (pictured above).  In concept it’s somewhat similar to Xortex from the Lab, where you control a space fighter with your motion controller.  But in Holo Impact, you are flying forward.  Yes there are a few games in this genre, but Holo Impact blows them all out of the water.  Besides the spectacular graphics, the gameplay is also fun, and it’s a little challenging but not overwhelming (at least in Normal difficulty)! If you like shooters, this is a must-buy for the HTC Vive or Oculus Touch (yes, Holo Impact is fully compatible with Touch).  It’s regularly $14.99, but during the Steam Winter Sale, it’s just $9.89.  It only has three stages, but even at full price, this is better than the arcades! 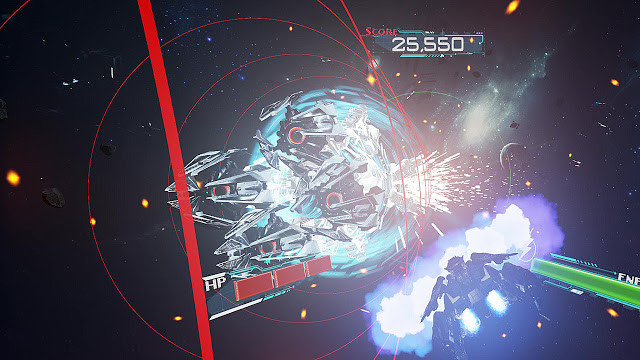 Holo Impact’s developer, RedStorm, is currently offering a bundle deal.  For $2 more, you can get Archer Guardian as well. Archer Guardian (HTC Vive; Oculus Touch) is a bow-and-arrow tower defense game like The Lab’s Longbow and QuiVR.  You defend a tower using arrows that can change to a fire, ice, or electric arrow for different effects.  Enemies will be coming from four directions, and you’ll need to teleport between four stations to defend against them.  The graphics are very good, and the shooting mechanic works reasonably well (except that the arrow has a rather short range).

What I don’t like about it is that it’s too difficult.  You’re by yourself, defending against enemies coming from the four cardinal directions, with no radar or indication of where the enemies are.  After the first wave, the enemies will come in groups of two or three from each direction.  BTW, did I mention a majority of them have shields or force fields (and some of them shoot back at you)?  It’s also annoying that they can go directly below your station, making it hard to shoot them.  Yes you can try to shoot them from an adjacent platform but the bow’s range is very short, making it difficult to reach them.  So, by itself, I wouldn’t get Archer Guardian, but for just $2 more, sure why not?

Holo Impact and Archer Guardian are both fully compatible with Oculus Touch (including haptic feedback).

God of Arrows (HTC Vive; Oculus Touch).  This is a bow-and-arrow tower defense game.  You’ll defend a castle against waves of monsters.  The monsters are creative and for example, includes one that will throw an imp at you, and if the imp gets you, it will fly in front of you, blocking your view.  From time to time, you’ll get magical arrows to help you.  I like the shooting mechanics and I was able to shoot accurately after only a few minutes of practice.  If you liked the Lab’s Longbow, this has a similar feel, with a greater variety of attacks and monsters. 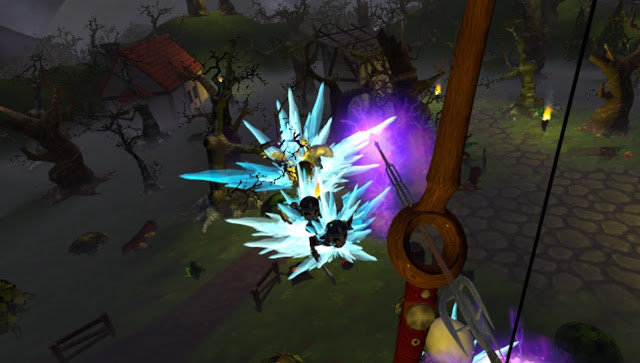 One complaint is that the voice acting sounds cheap.  I also found notching arrows into the bow took some getting used to.  You have to press the trigger only after the arrow is in position.  If you press the trigger before that, it won’t notch.

God of Arrows is compatible with Oculus Touch (even the bow’s shape will change to match the Oculus Touch) except that there’s no haptic feedback.  Hopefully the developer will fix that.
God of Arrows is regularly $7.99 but during the Winter Steam Sale, it’s $5.99.
Bubble Labs VR (HTC Vive; Oculus Touch).  This is a delightful app for little kids where they can play with a gun that can shoot colorful foamy bubbles.  You also have a fan that you can use to blow the bubbles around.  The only complaint I have is that the default color for the bubbles is black, and there seems to be no way to choose white bubbles, which I found strange. 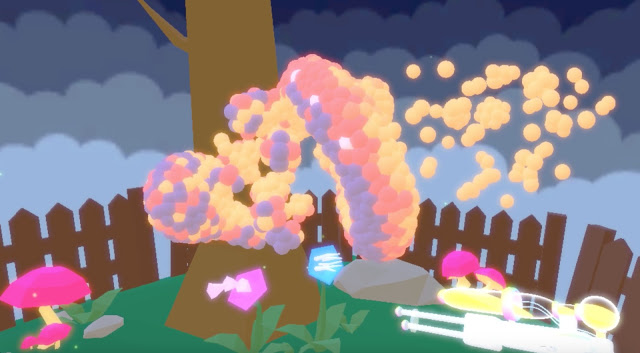 Bubble Labs is compatible with Oculus Touch. However, please note that Bubble Labs only works with NVidia graphics cards.
Bubble Labs is regularly $2.99 but during the Winter Steam Sale, it’s $2.
3D Sunshine (HTC Vive; Oculus Touch).  In this app, you can build Minecraft structures in VR, using intuitive controls.  It’s a fun creative app even if you’re not into Minecraft.   I’ve posted about it before but I’m a little surprised there still aren’t more reviews for this game.  3D Sunshine is free, and is compatible with both Vive and Touch.