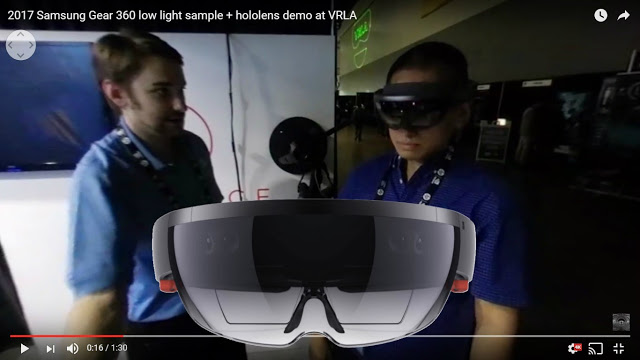 At VRLA, I got to try Microsoft’s Hololens augmented reality system for the first time.  Here is a video and my first impressions (it’s also a low light sample for the 2017 Gear 360).

There were several exhibits that had a Hololens for demo, including an extremely popular augmented reality Easter egg hunt where the line on Saturday stretched for perhaps 150 feet.  I regretted not trying it out on Friday where there was a much shorter line.

I did get to try Hololens at an exhibit by Inhance, a marketing company that creates VR and AR presentations for shows and conventions.  Here’s the 360 video (note: the background music is not from the mic – I added it in post):

Incidentally, I shot the video with a 2017 Samsung Gear 360, and the video shows the Gear 360’s low light capabilities.  (The convention hall was quite dark.)

The demo was a tower-defense type of game.  There was a small (table-sized) base, and there were tanks coming from all sides, which you had to lock on and shoot.  Here are my observations:

– The first thing that struck me is how small the Hololens display is.  My recollection is that it’s only about the size of let’s say an iPad Mini when you’re looking at it at normal reading distance.  It covers only a small field of view.
– The headset is comfortable and feels similar to the Playstation VR.
– The tracking was as accurate as a VR headset, and had positional tracking capability.  You can see in the video that I not only looked around but also crouched, and the view changed accordingly.  There was no noticeable lag.  This was impressive because Hololens uses inside-out tracking with no external markers.  If this is what Microsoft’s VR headset’s tracking is like, then it is very good.
– In this game, the graphics did not interact with the environment.  For example, the base was not on top of the table, nor did the enemy tanks maneuver around obstacles.

I really believe that AR has a lot of potential for commercial applications and everyday usage, as Mark Zuckerberg demonstrated at his F8 keynote.  For gaming, I remain skeptical about AR.  Although I was impressed with the tracking, from this demo alone, I’m not yet convinced that an AR headset like Hololens be great for gaming other than at shows or fixed installations.  If there was interaction with the environment and a wide field of view, I would be more interested.

At CES, I also tried another headset with a different approach, the Occipital Bridge, which has both AR and VR capabilities.  Instead of using a see-through screen, the Bridge uses an iPhone’s camera as a pass-through camera.  It then scans the room with its sensors to map it in 3D.  Once mapped, it can create effects like having virtual objects interact with the real world objects such as putting a hole in the wall, or making a virtual robot maneuver around a real world table (with 3D occlusion).

The Occipital Bridge had a lot of lag but it had a wide field of view like a VR headset, and it had interaction with the environment, so thus far, from my limited Hololens demo, I liked the Occipital Bridge concept (a VR headset with a pass-through camera) better than the Hololens’ pure AR approach.

In addition, because of the Hololens’ small field of view, I think Facebook’s AR camera approach (using the phone camera for AR) seems to work better because it would be more versatile.  You could hold it up, or presumably put it in something like a cardboard viewer to get a similar effect as the Occipital Bridge.