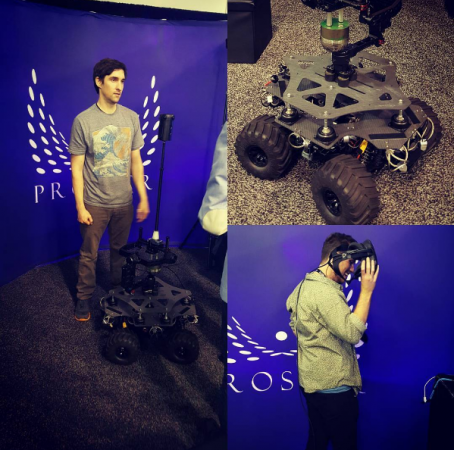 One of the interesting things I saw at VRLA is the RigRover, a remote controlled stabilized dolly designed for 360 cameras.
ProsperVR’s RigRover is a stabilized, remote controlled dolly designed for 360 cameras.    The chassis has a suspension system to smoothen bumps. In addition, it has a gimbal to keep the camera level and oriented in the same direction.  The RigRover’s gimbal is modular and can be used to mount a 360 camera on a drone.

Unlike other similar motorized gimbals on the market, the RigRover is very maneuverable and can turn in a very tight circle.  It has a relatively small profile compared to other motorized dollies for 360 cameras (see the sample 360 video below).

Here is the RigRover in action with a Z Cam S1:

Here is a sample 360 video made using a RigRover:

The RigRover is available for rent for $750 per day during the introductory period.  It’s available from RigRover.com.