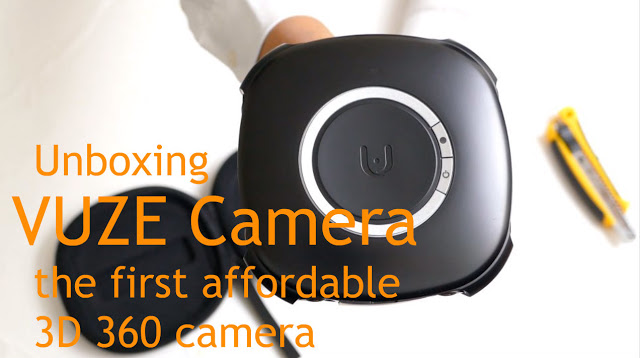 3D 360 videos offer a much more immersive view compared to 2D 360 videos.  However, until now, 3D 360 videos required large, expensive 360 camera rigs, such as the GoPro Odyssey ($15,000), which uses sixteen GoPro cameras, and required very powerful computers to stitch the videos together.

Initially, Vuze was scheduled for release in October 2016, but that was delayed for additional testing.  Finally, more than a year after it was first announced, the Vuze Camera ($799 at B&H) is here and it fulfilled all the promises when the Vuze was announced.Humaneyes, however, wanted to bring 3D 360 video capture capability to consumers.  Early last year, they announced the Vuze Camera, which would be the first affordable 3D 360 camera.  Instead of a large rig, Vuze would be a little larger than your hand.  At that time, the highest video resolution in  consumer 360 cameras was limited to 1920 x 960.  The 4k-capable Samsung Gear 360 had just been announced and would not go on sale until the end of April 2016.  Humaneyes promised that the Vuze would have a resolution of 4k per eye.  Perhaps most surprising of all, Vuze would be available for “under $1,000.”

Here are the key specifications of the release version of Vuze Camera:

The minimum shooting distance is 50cm in front of the lens and 150cm from the corners.

Enough with the specs.  Now here is the unboxing video:

The Vuze looks beautiful and sleek.  Note that the Vuze has a matte finish, unlike the glossy finish shown in some preproduction pictures.  [Vuze said they went with the matte finish because their Facebook readers voted for it over the glossy finish.] The leatherette case is handsome and semi-rigid.

The Vuze is about the size of a CD sleeve (remember those, younguns?).  It is heavier than I expected and feels about as heavy as a stone plate of the same size.  Even though the body looks plastic, it feels very solid.

Holding the Vuze takes a little getting used to, because there are so many lenses waiting to be smudged by your fingerprints.  The body of the camera will also show fingerprints (at least in the black finish — not sure about the other colors).  The included mini-handle is a convenient way to hold the camera without smudging the lenses or the body (it also has a hole for a wrist strap).  I think it would have been nice if there was a silicone rubber cap that could go over the camera and cover the lenses.  But the case functions like a lens cap.

Using the Vuze is very simple.  There’s only one button to start and stop recording.  Currently, you cannot take photos unless you use the app, but a future firmware update will enable taking photos using the camera’s shutter, without using the app.

The app has a very simple interface — even a nonphotographer should have no trouble shooting with it.  You simply choose from video (red shutter) or photo (yellow shutter) — and you have a self-timer from 0 to 30 seconds.  That’s it.  At CES, I also saw a live preview, but I wasn’t able to find the live preview setting in this version.

Speaking of settings, they are easy to access (with a button on the upper right corner) and are quite extensive, and wow, it really can shoot in 120 mbps…!

I do have a few items on my wish list.   I wish for exposure compensation (this version of the app doesn’t have it).   I also would like the startup time were faster (it takes several seconds).  Finally, I wish the Wi-Fi setting (on or off) as well as the self-timer were sticky (i.e., that they would retain their settings even after the app is closed or the camera is turned off).

For early preorders, you will also receive a mini tripod and a free Sandisk Extreme 64GB Micro SD card!  They were sent in a separate package from Israel (the Vuze itself was sent from Hong Kong).

The Mini Tripod is excellent.  It feels light yet sturdy, is comfortable to hold, and easy to use.   I plan to use it for my other 360 cameras as well.  One thing I would have liked is if there was a way to tighten the ball head (right now, it simply relies on friction).

Here is a playlist of sample videos from Vuze.  To view them in 3D, open the video in your smartphone’s YouTube app then tap on the Google Cardboard icon.

Here is a tutorial for Vuze Studio.  There’s a new version of Vuze Studio, and I’ll be posting the updated tutorial.

The stitching software requires a processor with an AVX extension.

Here are the minimum requirements:

– the most recent drivers.

Here are the recommended requirements:

I believe this means that at a minimum, you need an Intel Core i3, i5, or i7 processor that is at least 3rd generation (example: i5-3xxx).  See this table.  You can see if your PC qualifies simply by downloading the software here and trying to install it.  If you can install it without error messages, then congratulations – your PC qualifies.  (Note: the Mac version of the software is coming around Summer 2017.)

Otherwise, you may have to hunt for another PC like I did.  On eBay, I found a laptop and a desktop that were around $250 each with 4th generation Intel processors.  I decided to go for the desktop because I wasn’t sure if the laptop’s integrated graphics card would be adequate (or it might be adequate but too slow).  With the cheap desktop I found, I think I can add a low-profile GTX 1050 Ti 4GB ($150 from Amazon or B&H Photo) if I have to, and it might even end up being a second [barely] VR-ready PC.

Vuze is available for $599 direct from Humaneyes, or from Amazon or B&H Photo.   If you prefer VR180, check out the Vuze XR.