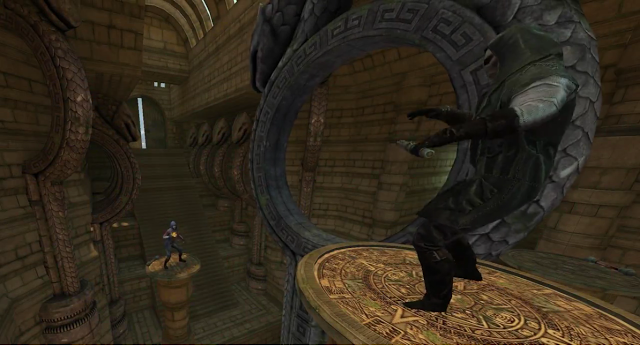 One of the most exciting releases for the Samsung Gear VR (reviewed here) is Wands, an online wizard combat game.
Wands is clearly inspired by the world of Harry Potter. While it lacks originality, Wands makes up for it in its execution, boasting some of the best graphics among Gear VR games, with Potter-esque background music as well.  Here’s the trailer:


Beyond the graphics, Wands is quite fun to play, although it does require some practice to get the hang of it.  You first put together a wand with a combination of spells, some for attack and others for defense.  As you win more battles, you earn points that you can use to gain even more powerful spells.

The combat takes place in a multi-level arena, and is in first person point of view.  Each player casts spells to attack his or her opponent until the other player’s Health is depleted.  To cast a spell, you bring up the spell menu by swiping on your Gear VR touchpad, or using the left trigger on your Bluetooth gamepad.  You then look at the spell you want to select it.  To use the spell you aim with your gaze (there’s a red dot to help you) and tap the Gear VR touchpad or press the right trigger. 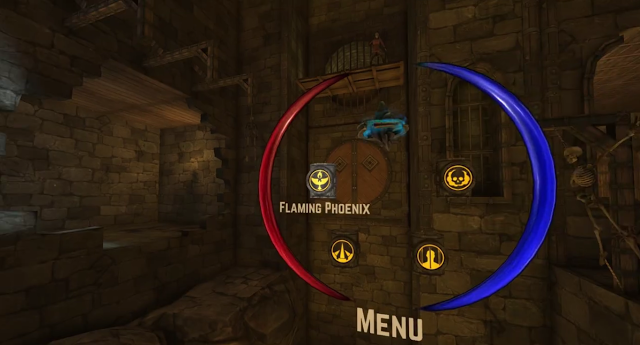 To survive, players also need to learn to avoid being attacked by teleporting to portals scattered throughout the arena.  However, you can’t just keep attacking and teleporting willy nilly, as each spell and each teleportation costs Mana.

At first, it is easy to lose sight of your adversary and then be hammered with attacks from the back.  However, as you become more familiar with a map, you learn which locations are more advantageous for attack, or for retreat (to allow your Mana to regenerate).

Wands makes pretty good use of VR.  Being able to look around in VR makes it easier to hunt down your adversary in the multi-tiered arena.  Seeing the space in 3D on the Gear VR also helps you to get a better feel for the area.

One of the more interesting features of Wands is that has a spectator mode.  Anyone can watch competitive matches on WandsGame.com.


Spectators can choose between a 3rd person point of view with some control over the camera, a split-screen mode with both players’ point of view, or the point of view of either player.

Wands is available for $5.99 on the Oculus Store.

TECHNIQUE: How to record a mixed reality video with the HTC Vive without a capture card
Mamut HTC Vive controller protectors will be produced; preorders available soon
Comment