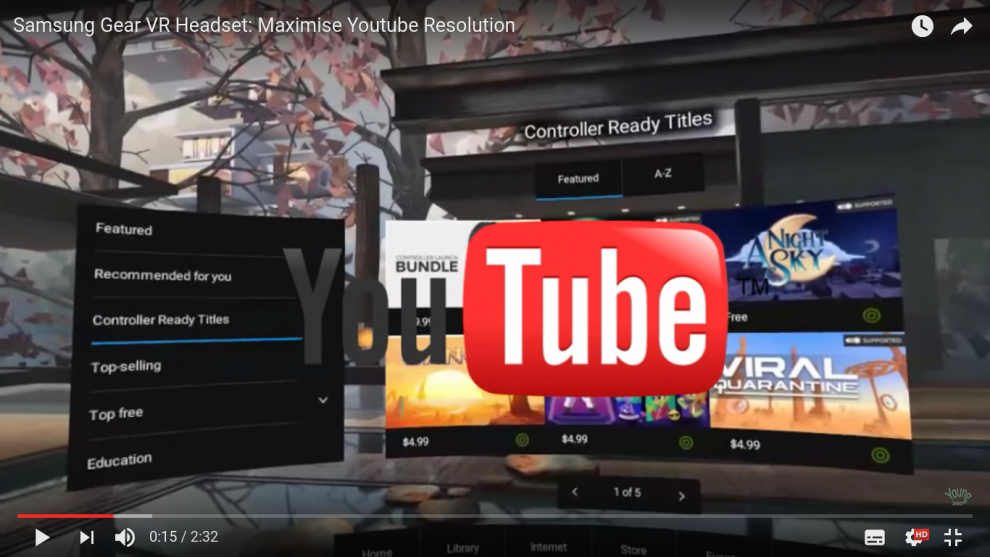 Young360 created a very good tutorial for watching YouTube in full resolution on the Samsung Gear VR headset.
Samsung Gear VR (reviewed here) is the most popular VR headset, with 5 million users as of January 2017.  It is my favorite platform for watching 360 videos because of its much more accurate head tracking compared to Google Cardboard (Oculus Rift and HTC Vive also offer accurate head tracking but 360 videos don’t utilize positional tracking anyway, so there’s little incremental benefit from using a Rift or Vive to watch YouTube).

However, one of the Gear VR’s peccadilloes is that when watching YouTube videos (in 360 or otherwise), the resolution would often be less than the highest available resolution.  At the same time, Google doesn’t want to create a YouTube app for Gear VR because Gear VR is competing directly with Google Daydream (which does have a YouTube app).

Thankfully, Oculus has updated the Gear VR’s software to make it easier to watch YouTube videos in full resolution, in either 360 or non-360 format.  Here is Young360’s video tutorial on how to use this new feature:


You can check out Young360’s YouTube channel here, where she posts many 360 videos.