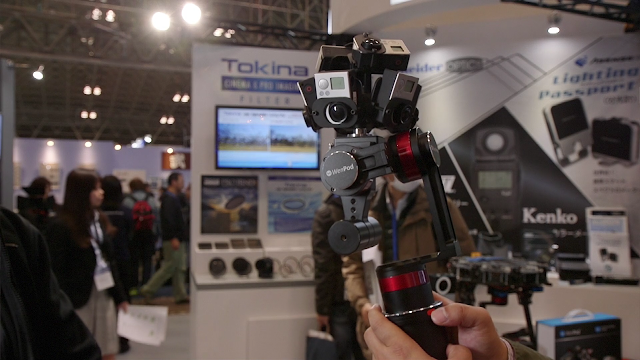 High quality consumer 360 video cameras such as the Nikon Keymission 360 and Samsung Gear 360 usually have internal gyroscopes to maintain a level horizon electronically.  However, professional 360 camera rigs generally don’t have a gyroscope and require an external device for stabilization.  The problem is that conventional stabilized gimbals are usually not suitable for 360 cameras or camera rigs because the gimbal frame usually goes around the camera, obstructing a significant part of the field of view.  The Wenpod Tarzan-G’s gimbals, however, stay below the camera, leaving most of the 360 camera’s field of view unobstructed.

The Tarzan-G supports a payload of up to 3 kilograms, enough to carry a small 360 camera rig.  It is powered by an internal battery that lasts up to 4 or 5 hours.


The Tarzan-G will cost approximately $2,000 and will be available direct from Wenpod.  Update: it’s available from Stabilizer Pro for $1649.

Thank you very much to Martin Smith for bringing this to my attention!