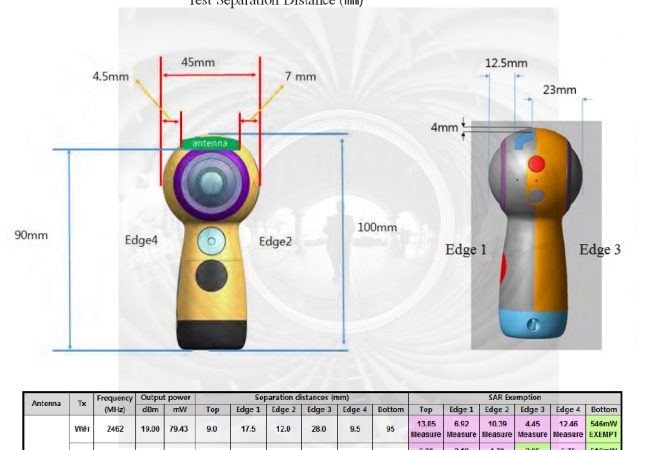 Sammobile found the FCC registration information for the Next Gear 360 (aka Gear 360 Pro), giving us our first look.  Here are the features we can infer based on the new design.

Besides making the Gear 360 easier to hold, here’s what we can expect from the Next Gear 360, based on its new design.

The current Samsung Gear 360 already has one of the best stitching (second only to the Theta) but the Next Gear 360 will improve that even further.

The current Gear 360 can overheat after about 25 minutes of recording time.

The new design moves the processor, battery, and other components of the Gear 360 into the handle, and increases the overall surface area.  This means the sensor, processor and battery all have more surface area to radiate heat away, and therefore improve resistance to overheating

One of the issues with the current Gear 360 is that the lenses lose focus when the Gear 360 heats up, an issue I’ve dubbed “blurgate.”  It appears to be caused by thermal expansion, which pushes the lenses out of focus.

Because the Next Gear 360 moves the processor and battery away from the lens, they won’t push against the lenses anymore, therefore there should be no blurgate effect.

The battery presumably was moved to the handle.  With more space available, it’s likely that the Gear 360 can have a larger battery and thus a longer battery life.

This is starting to be more speculative now, but by moving the components into the handle, Samsung has more space to put a larger and more powerful processor into the camera, very likely powerful enough to perform in-camera stitching.  There might be two stitching modes: in-camera stitching, which would be simpler and template based, and optical flow stitching for smoother stitching, via desktop or the app.

This is more wildly speculative, but the rounded edges of the Next Gear 360 could mean that it is designed to be shockproof and waterproof.  Those features would make sense because they are two advantages of its competitor, the Nikon Keymission 360.  If it’s shockproof, I would also expect the outer lens element to be replaceable, like those of the Keymission 360 and the Kodak SP360 4k.

Thank you very much to tech blogger Mike Cane (Atomic Supermen blog) for bringing this to my attention!