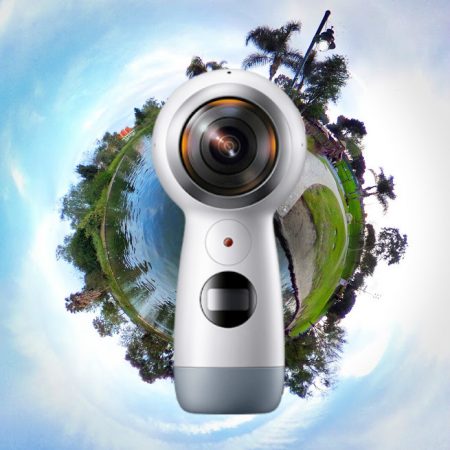 At the Samsung Unpacked event on March 29, Samsung launched the 2017 version of the Gear 360.  Some were disappointed with its specifications, but I believe the 2017 Gear 360 is in a position to become the most popular 360 camera.  Here’s why.

The most popular 360 camera today is the Ricoh Theta S.  The Theta was the first 360 camera for consumers so it did have a headstart, but even if you only look at sales for the most recent time period, it is still much more popular than any other 360 camera.

There are several reasons for the Theta’s popularity.  Its slim form makes it easy to carry.   Its body also serves as a handle, so it’s easy to hold and use.  Most importantly, it has best-in-class stitching.  Keep these advantages in mind.  However, the Theta has a weakness — its low resolution 360 video (1920 x 960), which is why Theta users have been clamoring for a 4k version of the Theta for a long while now.

Meanwhile, in August 2016, Samsung released the first version of the Gear 360 camera which had double the photo resolution of the Theta and had 4k video, for the same price as the Ricoh Theta.  While the Samsung Gear 360 was well received, it did not overtake the Theta in popularity.

The reason is because there were so many restrictions on using the Gear 360.  First, the Gear 360 was compatible only with Samsung phones.  Not just any Samsung phone, but only the latest flagship phones (S6 and above).  You could stitch photos and videos on the app, but videos were limited to 2k unless you had an S7.  You could stitch the photos and videos on a desktop, but only for PC — there was no Mac version.  And not all PCs were compatible.  It had to be a recent PC with a 3rd generation Intel Core processor.  With so many requirements, the Gear 360 had a much smaller pool of users than the Theta which was pretty much universal.

On top of those limitations, the Gear 360 had other quirks such as becoming blurrier when it warms up (“blurgate“), and there was a difference in color between the two halves of the image, making the stitching more apparent. 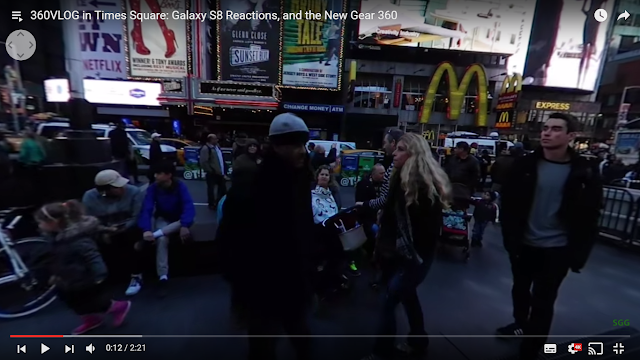 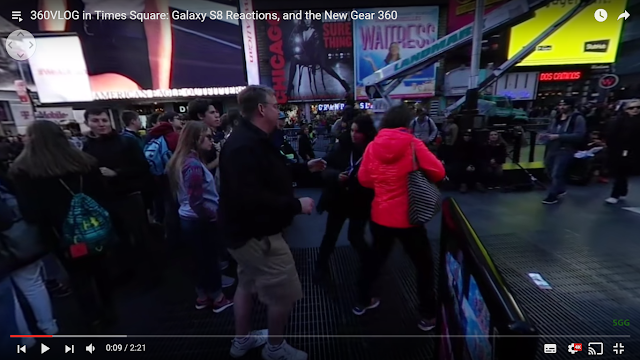 Somewhere in those shots are the stitch lines.  Can’t find them?  Here they are (I added a yellow line in the top one to make it easier to identify the stitch line): 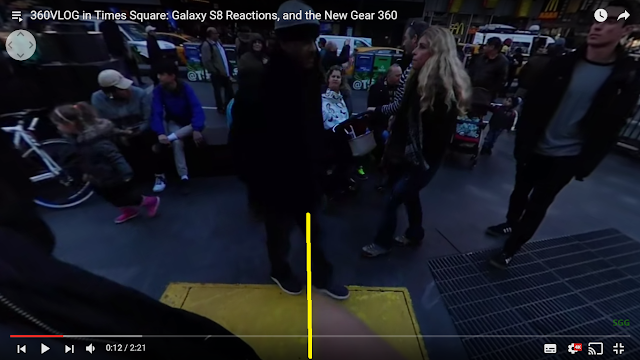 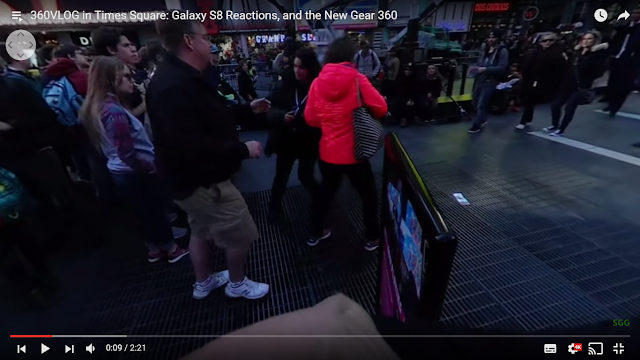 The 2017 Gear 360’s stitching is seamless!  And look at this frame grab, where both the grill on the street and the posters across the street are perfectly stitched, even though they are at different distances, showing a very effective optical flow stitching algorithm. 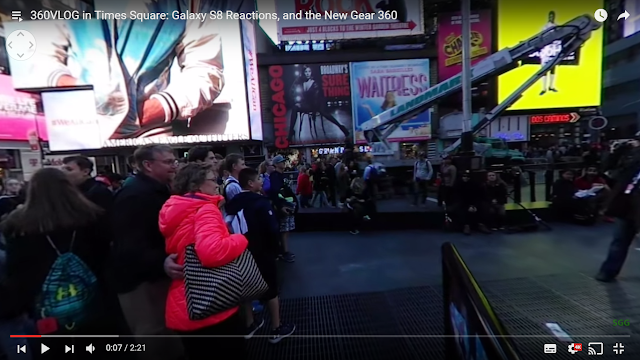 And what about color differences between the halves of the lenses?  Here’s a view looking up from one of the videos by ezone hk. 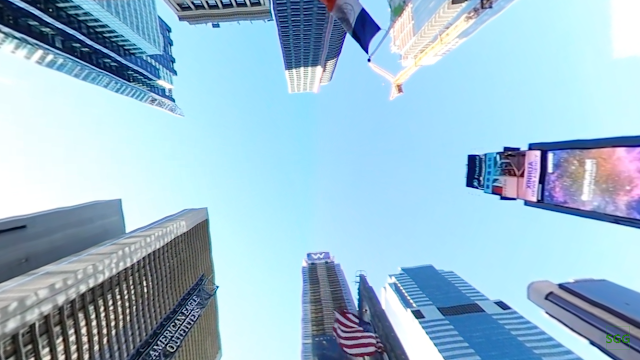 There is only a very slight, barely noticeable difference in color, showing that the color — and exposure — are very consistent between the lenses.

So, the 2017 Gear 360 has perfect stitching, just like the Theta S.  (Incidentally, this is one of the things I predicted about the new Gear 360, in addition to live streaming, less overheating, two separate types of stitching, which have also been confirmed.)

Note: the 360 video sample from Adam Lein is unstitched, which shows that the 2017 Gear 360 does not have in-camera stitching for videos.  I also posted the video by Max Lee, which has a more noticeable stitch line, but that was live streamed, so it is normal that it used much simpler template-based stitching.

Second, with a lower framerate, the camera can use a slower shutter speed than at 30fps for low light situations, which should yield a slightly lower noise level.

WHAT ABOUT THE KODAK ORBIT360?
The other major 360 camera release everyone’s waiting for is that of the Kodak Orbit360.  The Kodak does have a much higher sensor resolution (20mp BSI CMOS) compared to the 2017 Gear 360 (8mp CMOS).  However, based on the Orbit360 photos I found, the Orbit360 uses simpler template-based stitching, which will look less smooth than the stitching on the Gear 360.  The Keymission 360 also used template-based stitching and it was criticized for its stitching.  Time will tell whether the market will accept or reject the stitching on the Orbit360.

SUMMARY
In summary, the 2017 Gear 360 is easy to carry, easy to hold and use, has 4k video and has super-smooth stitching.  In other words, it has nearly all of the Ricoh Theta’s strengths, and none of its weaknesses. Moreover, it is compatible with a wider range of phones.  As for price, Samsung has hinted that the Gear 360 will cost less than last year’s Gear 360 (originally $349 MSRP), which would mean that it will cost the same or less than the Theta (~$300 street).   These advantages, combined with Samsung’s financial strength and its distribution network, put the 2017 Gear 360 in a very good position to take the lead as the most popular 360 camera.