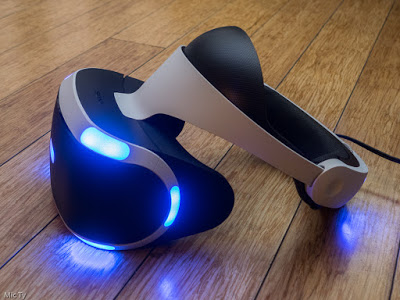 The state of VR right now is better than what skeptics would like you to believe.  More importantly, things will get even better from here.

All the major VR systems have been released: Oculus Rift (with Oculus Touch), HTC Vive, and Playstation VR for the desktop, and Samsung Gear VR and Google Daydream for mobile.  Yet VR is still relatively uncommon, there are still no killer apps, and more importantly, it appears that very few companies are making a lot of money from it.  There are some skeptics who are therefore declaring that VR is a bubble that has burst.  Here’s why I’m still optimistic about VR.

IS VR A BUBBLE?
First, let’s talk about some of the reasons that have been used to claim that VR is a bubble that has burst.
1.  VR is still uncommon.  Almost everyone has heard of VR, but there are still very few people who actually have a VR headset outside of the early adopter crowd.  Very few people I know have even a Google Cardboard headset (which most enthusiasts don’t consider to be “real” VR), much less a Gear VR or a destkop VR headset.  Skeptics use this to claim that no one wants VR.
2. No killer apps.  When Nintendo released the Nintendo Entertainment System (Famicom) in 1985, Super Mario Bros. blew everyone away.  Everyone wanted a Nintendo system.  While many people who try a VR system are amazed by it, few people outside of the enthusiast crowd can name even one VR game.  There isn’t yet a game in any VR system that has reached mainstream awareness.
3. Revenue.  There are rosy predictions about the amount of money that will be generated by the VR industry.  But thus far, there are no concrete figures from sales of VR headsets, leading some to speculate that not enough sales have been generated to crow about.
As for software, there are two VR games that are known to have made $1 million in sales during the first month of release – Raw Data and The Gallery Episode 1.  However, $1 million is not a huge amount compared to sales of non-VR software.
These are daunting facts compared to some of the expectations that were made for the VR industry.  But as you’ll see below, the conclusions being drawn from them are misleading.
WHY I REMAIN OPTIMISTIC
1.  Consumer interest in VR is accelerating.
Interest in VR spiked in March of 2016 around the time of the release of the Oculus Rift.  At that time, industry pundits acknowledged the strong interest in VR but some were skeptical about whether VR was just a passing fad or was a long-term trend.  Here’s a Google Trend chart of what interest in “virtual reality” looked like in June 2016:

That’s a very steep climb. Surely, it could not be sustainable… or could it?  Here is what the same Google Trend chart looks like right now:
Not only has interest in VR been sustained, it has grown — and not just at the same rate.  Rather, interest in VR has increased exponentially.  The spike in interest in March 2016 now looks like a blip compared to the interest in VR now.
2.  Hardware sales.  OK but has the interest in VR translated into hardware sales?   The Oculus Rift and HTC Vive are not mass market products largely because it is still very rare to find people who have the PC hardware needed to run them.  As I argued a couple of months ago, I argued that their performance is therefore not an indicator of VR’s mass market penetration.  Rather, I pointed to the Playstation VR as the real litmus test of mass adoption of VR.
PSVR was released on October 13, 2016.  How well has it sold?  Sony hasn’t disclosed sales figures for PSVR yet but here are some facts:
– On Amazon, it is sold out.  Resellers are selling them for between $240 to $300 over their MSRP. 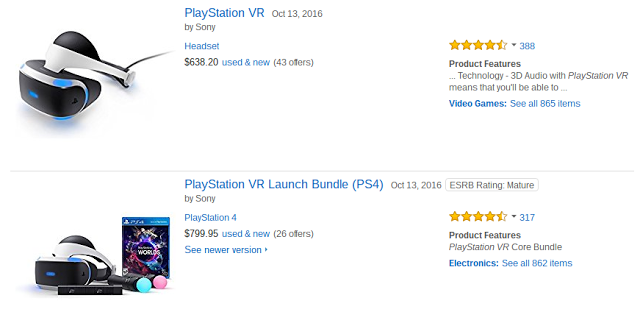 – On Gamestop, you can buy PSVR only in bundles, and the cheapest available bundle tacks on $200 more extras than the $499 base price.  Lower cost bundles, even a pre-owned bundle that costs almost as much as a brand new one, are sold out. 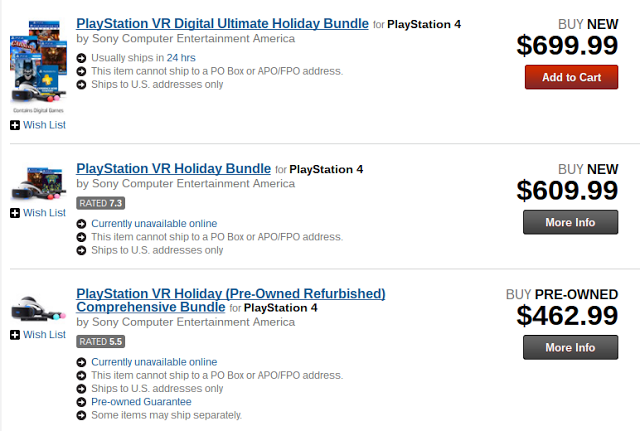 – In Japan, the PSVR is sold out everywhere.
So, yes, PSVR – which is the first true mass-market VR product – has sold extremely well, even faster than Sony can produce them.  Sony might talk about PSVR sales at the next earnings call for 2016 Q3 on February 2, 2017.
3. Time.  Skeptics have been quick to declare VR dead on arrival but the truth is that there hasn’t been enough time for VR’s necessary ingredients to come together – specifically hardware and software availability.  While there is tremendous interest in VR, it’s still too difficult to buy a PSVR, which means the number of VR users right now does not reflect the number of people who are actually interested and willing to buy a PSVR.  As long as scalpers resellers are able to sell the PSVR for a significant premium, it means the demand for PSVR exceeds its supply.
As for software, VR is a completely new medium and besides the increased difficulty in developing for VR, everyone is still learning what works and what doesn’t.  Something as simple as locomotion (movement in the VR space) doesn’t have a clear solution yet.  That’s the biggest reason why we haven’t yet seen a Triple-A game that takes dozens of hours to finish.  It simply doesn’t make sense to spend millions of dollars developing a game only to find out that the game mechanics don’t work, or you were creating the wrong type of game.
However, given more time, these two issues should be resolved — PSVR should become more readily available, and VR-ready PCs should continue to become more affordable and more common.  Developers will learn which designs and techniques work, and will be able to create longer and more detailed games — the kind that could qualify as a killer app.
4.  Unity. Right now, there are no standards yet for VR.  However, manufacturers and developers are coming together to develop standards that will facilitate development for VR:
– The primary VR headset manufacturers recently formed the Global Virtual Reality Association (GVRA).
– Khronos, the consortium that developed standards such as OpenGL, is creating standard APIs for VR.
– Facebook is working on React VR and the Carmel browser, cross-platform tools that enable VR content to be viewable on any device.
While these are future developments, on a practical level, we’re already starting to see greater commonality between VR systems.  Oculus Rift users can now use most of the games that were originally designed for HTC Vive.  HTC Vive users have been using Revive to play new motion-controlled games for the Oculus Rift, which Oculus appears to have accepted.  Meanwhile, some games for the Oculus Rift and HTC Vive are being ported to Playstation VR.  By allowing users to play VR games on any system, manufacturers are making it more commercially viable for developers to invest their time and money on creating VR games.
5. 360 photos and videos.  360 and VR are not the same thing.  Nonetheless there is a strong synergy between them.  360 photos have been in common use for decades now (since Quicktime VR in 1994) and show no sign of ever going away because they are very useful for real estate and other commercial applications.
Here’s the thing: as long as there are 360 photos and videos, there will be a benefit to viewing them with a VR headset.  This ensures that there will always be a commercial use for VR, and there will be a solid “floor” floor the demand for VR, below which it would not drop.
6.  Universal appeal.  The biggest reason I’m more optimistic than ever about VR is its undeniable and nearly-universal appeal among people who’ve tried VR.  I have demo’d different types of VR (desktop and mobile) to people from different backgrounds and age groups.  Most people were interested in trying it out.  A few didn’t want to try because they said they would get dizzy.
But the one thing that was common was that everyone who tried it was amazed or thought it was cool, even the ones who said they would get dizzy.  In one case, one of them said she was not impressed the first two experiences she tried but after trying the third, she had to agree it was cool.
Critics of VR tend not to have tried it, or else they agree that it’s great but have doubts about its commercial viability.
Few products have such wide appeal, and VR is unique in being able to immediately inspire intense emotions in a way that cannot yet be matched by any other form of media, as attested by many VR reaction videos on YouTube.  Because there are no products that can provide those same benefits as VR, there will always be a place for VR in gaming and entertainment industries.  The only question is whether it will become a truly mass-market product, or a product that is reserved for arcades and theaters.
CONCLUSION
Inspite of what skeptics would like you to believe, VR is actually doing really well right now is better than .  More importantly, things will get even better from here.