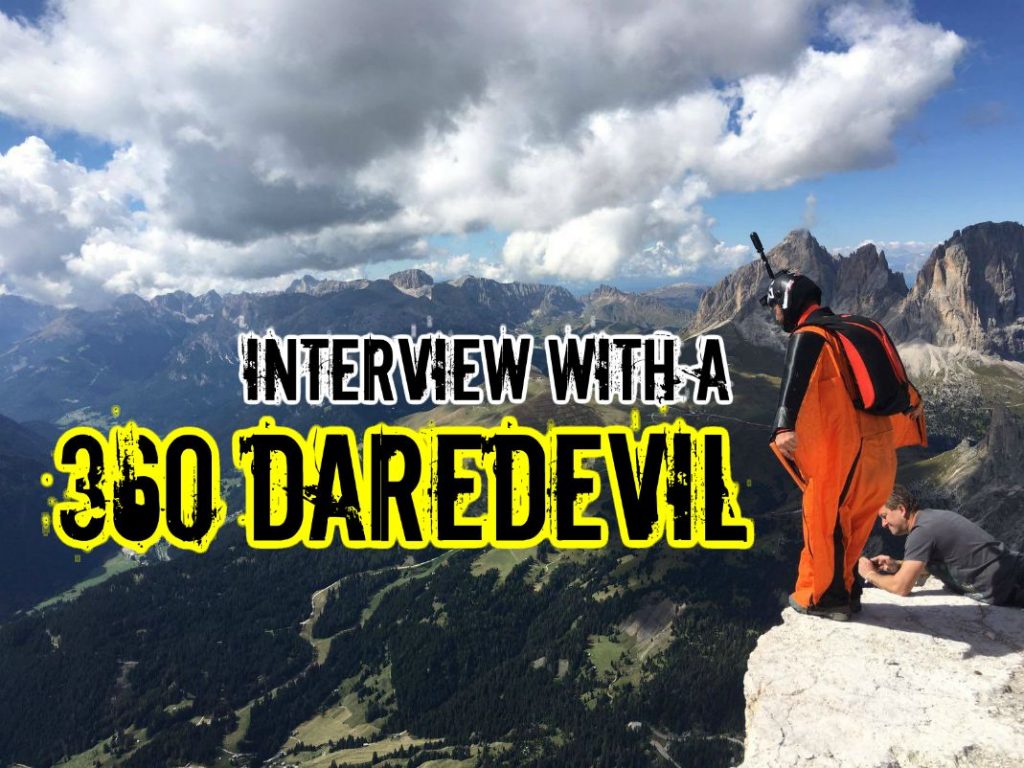 Mic Ty: Tell us about yourself. How long have you been BASE jumping / wingsuit flying / skydiving?

Fabrizio Paciocco: I’ve had my head in the clouds for 11 years: to become a safe wingsuit base jumper you have to focus on training, spend every jump to gain experience… and have fun. Training without having fun simply means that you will learn less and fight more!

When I started skydiving I didn’t have a clear idea of ​​what I wanted to do but after a few months it was clear that falling wasn’t the right option. I wanted to fly! From time to time someone asked me about the use of wingsuits.  Watching YouTube videos,all seem easy and people think it is enough to look around for a good course and then jump … It is not so. You have to start skydiving to get the license.  After no less than 200 skydiving jumps, if your skills are strong enough, you can find someone to teach you how to use wingsuit in a skydiving environment. When you are strong enough in the basics, you can start your first BASE jumping course to jump off bridges, buildings and other cute things.  Then, when you are strong enough in [BASE jumping], you can combine it with your wingsuit skill and start jumping off with it!

MT: How did you get into a scary sport like BASE jumping?

FP: Before doing that, I practiced other real scary sports like caving and cave diving exploration.  They may be less spectacular but more dangerous and less safe, for sure. In Europe we don’t have nice caves with comfortable temperatures, clean floor and high ceiling. [Instead] imagine a place so narrow and small that you have to empty the lungs [to be able to move] ahead (otherwise you will remain stuck), full of mud and with 5 degrees… Then, imagine to want to do a dive into a lake, inside a mountain, with 800 meters of rock over your head!  No way to be rescued from there.

One day a friend forced me to go bungee jumping with him.  After that, I had just one thing in my mind: the experience was too quick. I have to go higher. I tried to find a higher bridge but instead, the higher “thing” I found for jumping off was an airplane… and from there, step by step, I gained the skills for doing my first jump from a mountain.

In the popular imagination, BASE jumpers are a tribe of crazy adrenaline addicts but it isn’t so. Quite all mates I keep are scared on the object edge before the jump. We all think that this mood is mandatory to be focused and be completely there in that moment… When the fear disappears, may be it is time to move yourself into another sport.

MT: When did you first start shooting with a 360 camera?

FP: I discovered 360 cameras 4 year ago if I remember well.  My first one was one Kodak and the second one Samsung. I tried different setups before having an acceptable result, testing different stick positions on the body and on the helmet.

[360 cameras] opened for me a fantastic world. I often do my hike and jump alone, so all [my action cam] videos were basically in first person view. With this new 360 camera, I was able to film myself during flying, even when alone.  Now, with new cameras with higher resolution, videos are defined and rich with details.  I’m very satisfied.

MT: What do you think of using 360 camera compared to a normal action cam?

FP: 360 cameras have a little handicap in the action sports: they need a selfie stick to have great results. This could be dangerous or hard to manage in some situations. When you have to move yourself in a confined space, a stick adds a level of complexity that is not insignificant for your safety and also for camera safety, of course.

If you are subjected to impact shock, you have to take into account that you can break the stick and lose the camera (damn, this happened to me — I have a fantastic video and a broken camera!) On the other hand, you have no way to have the same results with a normal action camera.  I can say that [inconvenience] from time to time is worth it.

FP: I’m not a super content creator. When I do 360 video editing, I simply mix different camera points of view with music, without effects or other things. Maybe this is what [almost] all end users do. Some brands like Insta360 developed a good software platform to make easy a quick video export, and I think that was the key for their growth in the market. Paradoxically, today, it seems more intuitive to export a flat video from a 360 camera than from a [non-360] one because with the latter, to have a nice result, you have to edit, maybe adding more points of view to avoid boring [viewers].

MT: Where can people see more of your videos?

FP: I’m a 46 (!) old teenager so I have (quite) all social media channel like Facebook, Instagram and Youtube. If you want to see some video or photo and give me your comments, you will welcome!

Thanks again to Fabrizio for providing an insider’s look at the sport of wingsuit flying and for sharing his amazing videos.  Check out Fabrizio’s pages and subscribe to watch more of his inspiring videos!