You read that headline right.  You CAN trigger the Samsung Gear 360 wirelessly with an iPhone, thanks to a workaround I found out from Gear 360 shooter Fabio Bersani!
Here’s how to trigger the Gear 360 with the iPhone:
1. Download the Google Street View app.  You may need to create a Google account, etc.
2. Turn on the Samsung Gear 360, then hold down the menu button.  When you see Gear 360 Manager, press the menu button twice to switch to “Google Street View.”  Then press the shutter button to select that option.
3. On your iPhone, connect to the new Wi-Fi network “Gear 360_(xx:xx).OSC”  Enter the password shown on the Gear 360’s display.
4.  Once the iPhone is connected, launch the Street View app.
5.  To take a photo, click on the camera button on the lower right corner.
That’s it!
Here’s a shot for proof (the map has been warped for privacy): 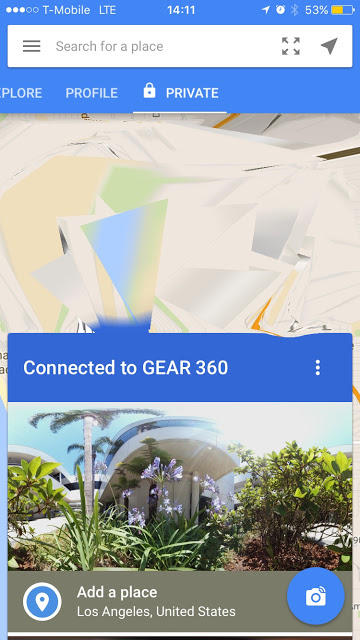 It will will be both in the memory card as well as only be in your Photos / Camera Roll (not in your memory card).  The photo is already stitched, up to the full 30mp resolution: 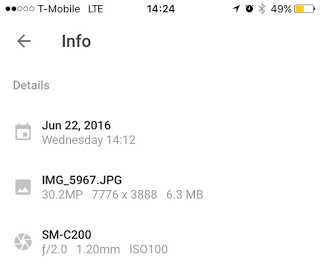 There’s no live view and no video, and no controls other than triggering the shutter.  I saw an option for HDR but it doesn’t seem to do anything different.  There’s also an Auto Capture button.  Not sure exactly what it does.

For shooters with an established iPhone-based workflow and who are reliant on iOS apps such as Rollworld, this feature makes it much easier to take photos with the Gear 360 and have them ready in the iPhone for editing.

RELATED POSTS:
– modified Gear 360 Manager app that can run on some Android phones.
– trigger the Gear 360 remotely with the dedicated Bluetooth shutter.
– stitch on a Mac without 3rd party software