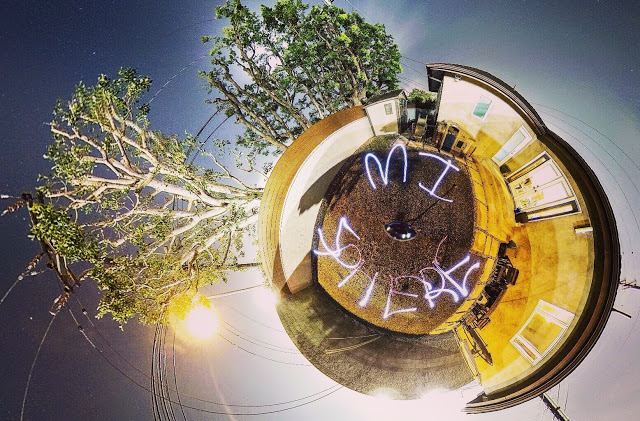 More updates about the Xiaomi Mi Sphere 360 camera!
– a low light video sample
– a long exposure shot (well, you’re already looking at it…)
– a list of bugs so far
– a discount.

Because the video was in low light, I had to raise the exposure in post by +1EV in Adobe Premiere.  I was expecting the worst because if you push the exposure in postprocessing with a small sensor, usually you get very noisy video.  The only question was how bad it would be.  So I applied the exposure adjustment and…. nothing.  No problem at all….! :-O  There was only a slight increase in noise in the shaded area but most viewers wouldn’t even notice it.  Wow this camera keeps getting better…

LONG EXPOSURE SHOT
I also took a long exposure shot last night.  The Xiaomi Mi Sphere is one of the very few 360 cameras with manual exposure.  And even among those with manual exposure, some, such as the Panono and LG 360 Cam, have a shutter speed that tops out at around 1 or 2 seconds.  That’s why the Ricoh Theta is so amazing for photos — because the shutter can be as long as 60 seconds.  Meanwhile the Xiaomi can use a shutter as slow as 32 seconds on Android.  Not as slow as that of the Theta, but it does have ISO as low as 50 (Theta’s lowest ISO is 100).

I tried it out last night in our backyard.  There were street lamps, so I thought the shot would blow out.  But 32 seconds was perfectly fine at ISO 50. 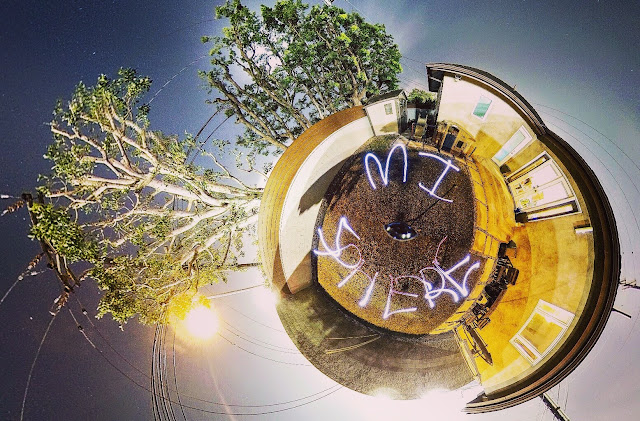 And sometimes with long exposures such as this, the sensor gets hot and you’ll see noise.  But the Xiaomi seemed to be fine, even after several successive attempts of long exposure shots.  And it did not seem to need long exposure noise reduction (the shot was immediately viewable – there was not a second shot for a black frame subtraction exposure).

Combined with a photo resolution that is almost double that of the Theta (23.88 mp vs. the 14mp Theta), the Xiaomi could bump off the Ricoh Theta as the best 360 consumer camera for photography.  I will do a direct comparison soon.

XIAOMI MI SPHERE SOFTWARE ISSUES
While the Xiaomi’s hardware is one of the best (if not the best) I’ve seen at this price point, the software is quite poor.  I want to tell you everything I’ve found so far, so there are as few surprises as possible.  But stick around to the end of the article.

1.  The biggest problem is exporting the video.  (Photos are no problem.)

In addition, the app crashes a lot when exporting/stitching the video.  Moreover, unlike Android, there is no video editor for the iOS version of the app.

B.  Android works but has bugs (tested on Samsung S8+ / Android 7).
When I tap on export the video to the phone, it stays at 0% and doesn’t move.  The workaround is to use the video editor.  However, the video editor is limited to 5 minutes.  (That’s why my first posted sample video for the Xiaomi ends abruptly.)
Another issue is that when I use the video editor, the audio becomes not synchronized.  It seems the delay is around 17 frames (around half a second).  For some videos, it won’t matter.  However, you can sync the audio.  You will need a video editor to spit the video and audio then move the audio to make it in sync with the video.

Update: version 1.6.4.12888 of the app fixed the export issue. I can now export without any problems.  There is also no problem with audio synchronization.

There is unfortunately no desktop software for Windows or Mac.  I don’t know if they will ever make one.  A reader suggested using Muvee for the Mac, which can stitch the original Gear 360.  However, I don’t have a Mac to test.

To help you evaluate whether your phone can stitch the photos and videos correctly, I’ve provided an unstitched photo and video here.  The iOS app is here.  The Android app is here.


Other bugs:
2. The videos don’t have 360 metadata.  When I share the video to Facebook, it is not 360.  Instead, I need to add 360 metadata manually with the YouTube metadata injector tool (see step 2 here).
Update: version 1.6.4.12888 of the app fixed this issue.  Exported videos now have 360 metadata.3. There is a slight difference in color between lenses in some lighting conditions.  This is most noticeable outdoors.  This is different from flare and can be seen even during an overcast day.
4. Needs self-timer without the app (maybe activate by double-clicking on the shutter).
5. The 6-axis stabilization works very well, but I can’t see it unless i share the video to “Moments,” which seems to be Xiaomi’s sharing platform.  There should be a way to export the stabilized video to youtube or Facebook.
Update: version 1.6.4.12888 of the app fixed this. I can now export stabilized video and it works very well!  See this video. 6. Sometimes when viewing photos or videos, the horizon changes and becomes not level anymore.  This usually happens after I look around the image several times.  When I close the photo and re-launch it, it is normal again.  This implies it is a problem with the app, not the hardware or photo or video itself.
7. There is no option to share 360 video on YouTube automatically.
8. There are many menu options that are in Chinese.  Similarly, the manual is only in Chinese.  These should be translated.
Update: version 1.6.4.12888 of the app fixed this issue.  Nearly all menu options in Chinese have been translated.9. In Android, sometimes I get the message that this app (Mi Sphere app) is slowing down the system. This happened only once.

DISCOUNT
OK so you’ve stuck around this far.  That’s great!  Our friends at GearBest have offered a special discount.  It is available only for 10 buyers, so it’s first come first served.  To get the discount, use this link to buy the Xiaomi.  The current price varies depending on inventory levels but can be as much as $320.  Use the coupon code: mijiaCam to get it at a special price of $270.99.  In addition, occasionally, there is a flash sale that can offer an even better price.

Thank you for using the link to buy the Xiaomi, which supports 360 Rumors at no additional cost to you, so I can do more tests and reviews!

Tutorial, guide, and workarounds for using the Xiaomi Mi Sphere Camera
These might be test videos from the Yi 360 VR!
Comment