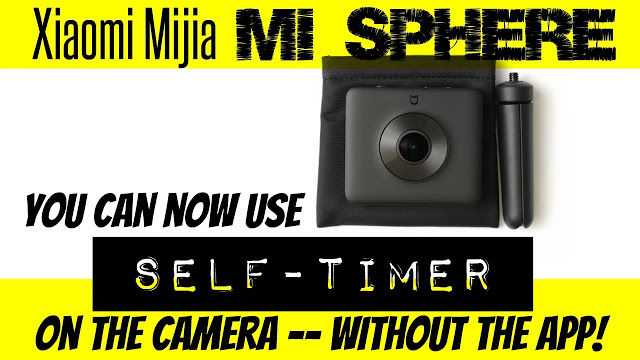 The Xiaomi Mi Sphere keeps getting better!  It now has a self-timer that you can use without the app!  Here’s how to use it, plus a video demo.
A self-timer is a very important feature for 360 photos because it allows you to move away from the camera after taking the shutter so that your fingers or hands don’t appear oversized in the 360 photo.  Until now, the Xiaomi Mijia Mi Sphere 3.5K 360 panoramic camera required using the app to use the self-timer feature.  But now there’s a self-timer feature that you can use on the camera, without using the app!

Here is how to use it:
1.  Turn on the camera and connect it to the app.
2.  On the app, set the self-timer to 10 seconds.  The camera will remember this setting even if it is turned off, or if the app is disconnected.
3.  To use the self-timer, hold down the shutter button until you hear a beep.
4.  When you hear the beep, the camera LED icon will start flashing to let you know it’s counting down.  After the countdown you’ll here a triple beep, then after about 1 second, it will take the shot and beep to let you know it’s done.

As I mentioned in the video, in case you missed it, the iOS app has also been updated to allow shooting up to 32 seconds, and 360 photos now have 360 metadata to make them easier to shoot.  However, one issue is that when viewing the 360 photos on Google Photos, the photos can’t seem to be displayed.  They look fine anywhere else such as Facebook or even in Google’s own Streetview.  I’m supposing this bug will be fixed.

In any case, having a self-timer makes the Xiaomi Mi Sphere more useful than ever!