Yi 360 VR is the first all-in-one 360 camera from Yi Technology, with the highest resolution for consumer 360 cameras at 5.7K.  Their updated webpage shows that the live streaming has been upgraded to 4K.

When Yi 360 VR was announced at NAB Show 2017, it offered three key specifications: 5.7K photos and videos (with desktop stitching), 4K in-camera stitched videos, and 2.5K streaming.  However, the new page for the Yi 360 VR shows that its live streaming has been upgraded to 4K.

The Yi 360 VR’s new tagline is immersive (alluding to the high 5.7K resolution), live (because of the 4K live streaming), and effortless (with 4K in-camera stitching).

Last week, there was a rumor that the Yi 360 VR would have image stabilization.  However, Samuel Ho Chi San, who is a beta tester said it does not have stabilization: 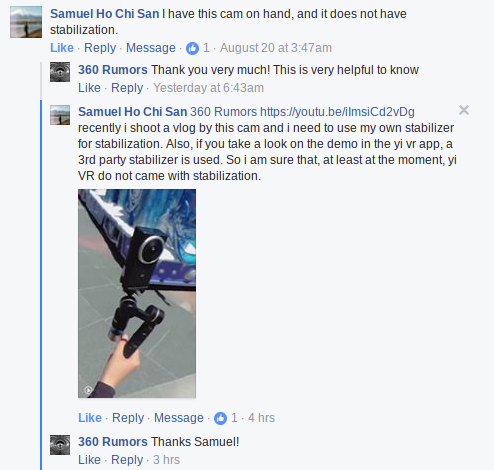 The Yi 360 VR is still currently expected to be released in September for $399, half the price of the only other 360 camera touted as having 5.7K resolution — the Garmin Virb 360.  (Note: In the case of the Garmin Virb 360, the 5.7K resolution requires expensive third stitching software whereas the Yi 360 VR is expected to include the stitching software).

You can now take 360 photos with the Facebook app; why this benefits the 360 community
New sample 360 photo from Sigmawit SW-4 raises many questions
Comment