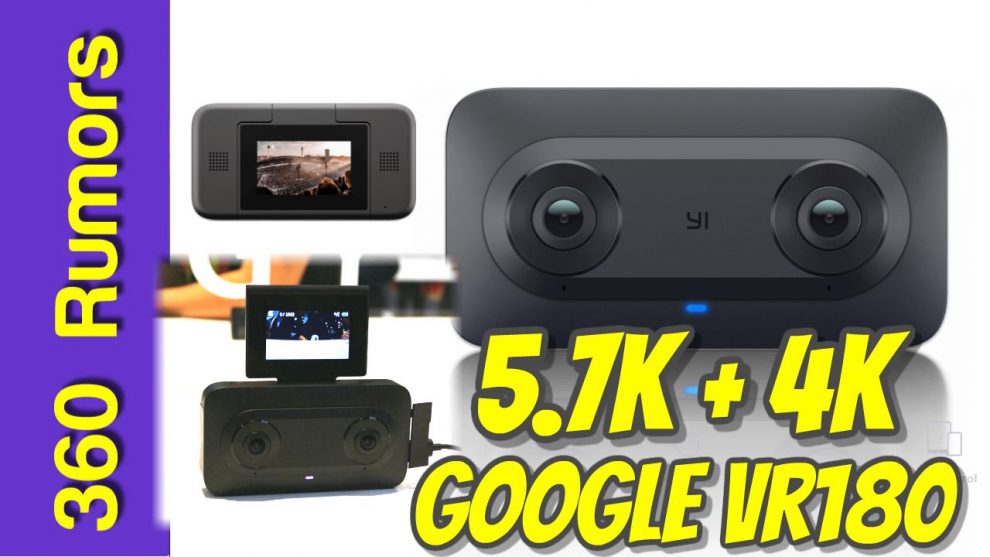 Everyone now knows what VR is but it hasn’t become mainstream yet.  Few casual users have 360 cameras or VR headsets, and fewer still have both.  Google’s VR180 could be the one of the key devices to bring VR to the mainstream, which is why I’m excited about the Yi Horizon, Yi Technology’s 5.7K Google VR180 camera, launched at CES 2018.  Here’s a hands-on report.

What is Google VR180 and why is it important?

Everyone has seen 360 photos and videos on their smartphone but only a small fraction have used a VR headset (for this purpose, I’m including Google Cardboard).  In fact, I was at CES with Veer’s CEO Ayden Ye and he gave some cardboard viewers to some staff at a booth for a 360 camera.  Shockingly, they had never tried one before.  Again — these are employees of a 360 camera company.  I was astounded.

One possible reason people aren’t using even a cardboard viewer is because they don’t see a sufficient difference between swiping a 360 photo or video on a screen, as opposed to watching on a VR headset.  And I think that’s because most 360 photos and videos they’ve seen are 2D, so looking at it in a VR headset is like looking at wallpaper inside a ball — you can look around but it’s not really so immersive.

Google’s VR180 is a new format that addresses several issues at the same time:
– When people are viewing it on a regular screen, it shows a static (non-VR) high-resolution 4K video. This means that in a non-VR view, the video quality will be as good as a 4K camera such as a GoPro or a 4K smartphone camera, so it will not be at a disadvantage in image quality compared to a non-360 camera.
– When people view it on a VR headset, they see a 3D VR view (front-facing hemispherical). Because it’s 3D, it will be much more immersive and will be a more powerful use of a VR headset. At the same time, there will be a bigger contrast between the VR view and the non-VR view, which gives people a reason to use a headset and not just swipe on their screen.
– Because the VR view is hemispherical, it is much easier to compose for it. With a fully spherical 360 camera, you have to re-think composition and place the camera with the entire 360 view in mind. With Google VR180’s hemispherical view, they can compose for it as easily as they can with a typical action camera such as a GoPro.

Here is a playlist of sample Google VR180 videos from prototype cameras (to see them in 3D, you’ll need to view them with a Google Cardboard or similar viewer):

There will be several VR180 cameras but one of the most attractive ones is Yi Horizon, a 5.7K Google VR180 camera that features a flip-up touchscreen LCD.  Here’s a video of the Yi Horizon from CES 2018.

Here are the key specifications:

It uses the same sensors as the Yi 360 VR, which has one of the highest video quality among consumer 360 cameras.  Here is a sample from a prototype of the Yi Horizon.  Check it out! (Again, you’ll need your smartphone and a Cardboard viewer to see it in 3D.)

You can see that it is significantly more detailed than most 360 cameras.  The dynamic range is excellent as well.  If you look at the white top of the tom tom drums, the highlights are preserved despite being under the spotlight and at the same time, the shaded part of the black speakers on the floor still have detail.

BTW the sound in this sample was with an external recorder.

Besides the 5.7K resolution, the flip-up touchscreen is one of its key features. Other Google VR180 cameras use a smartphone to control the camera. The Yi Horizon can be controlled by a smartphone too but in addition, you can control it directly using the touchscreen. And for selfies and vlogging, the screen can flip up and autorotate so you can see what it will capture. I have a Samsung NX500 and Panasonic FZ1000 both with flip-out LCD screens and for me, this feature is extremely useful.

Yi Horizon will be available by summer 2018 for around $400.  Its closest competitor is the Lenovo Mirage camera, which has a 4K resolution and has no LCD screen (price TBD).  Meanwhile, Lucidcam, one of the first 3D 180 cameras for consumers, is $499. Z Cam K1 Pro, a professional 5.7K Google VR180 camera with large Micro Four Thirds sensors, is $2,995.  Among these options, Yi Horizon looks like a very attractive balance of value and performance. I’m really excited about the Yi Horizon and very much looking forward to its release. You can sign up to be notified here.