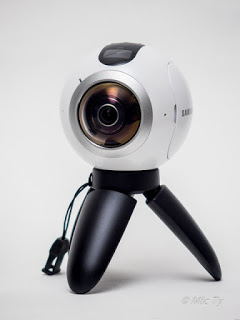 It appears you CAN stitch Samsung Gear 360 images on a Mac without 3rd party software after all.

The Samsung Gear 360 (reviewed here) remains the most affordable 4k 360 video camera on the market at the moment.  However, it is compatible only with the latest flagship Samsung smartphones (S6 and above).

However, the Gear 360 does not stitch its photos or videos in-camera.  To stitch its images, you need the latest flagship Samsung smartphones or its included ActionDirector software (Windows only).

Until now, the solution for stitching on a Mac was Autopano Video (299,00 € for the basic version).  However, it appears that you can use a Mac to stitch Samsung Gear 360 images by using Bootcamp to install Windows then using the ActionDirector software.  Some users have tried this and it didn’t work, but it did work for Jasper Schelfhout and his Macbook Air. 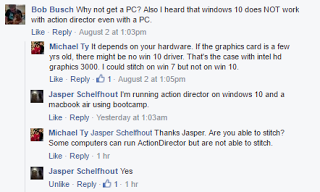 Please note I don’t have a Mac to test, so this is unverified.

I believe the key is the type of graphics processor in the Mac.  ActionDirector requires Open GL 2.1 or above.  To have Open GL, your graphics card must be capable of it, and there must be a driver for the OS that you’re using.

You can now share your 360 videos on Jaunt VR (maybe)
Confirmed: Xiaomi VR headset is just a Cardboard viewer, it’s not even low cost
Comment