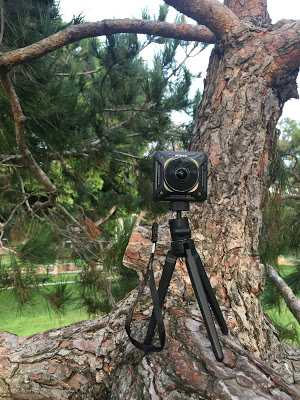 The Nikon Keymission 360 (reviewed here) is one of the most controversial 360 cameras, largely because of its half-baked smartphone app.  But the fact is that you don’t have to use the Snapbridge 360 / 160 app to use the Keymission 360.

The Keymission 360 has received some good reviews from experienced 360 camera reviewers (e.g. DigitalRev; ePhotozine; and here is my review) but a majority of its user reviews have been negative. Almost everyone agrees that its hardware (including lens and sensor) are good, and it is solidly built.  However, its apps are rather poor.

The desktop software has the basic functions you expect, but renders the video with low framerates (lower than actual).  The smartphone app is much worse.  It requires the user to jump through a lot of hoops to pair with the Keymission.  Many negative reviews cite an inability to pair the Keymission, and I can’t really blame them.

It’s a shame because the Keymission does have several significant advantages.  It has very good video quality, and is still the only spherical 360 camera that is both waterproof (to 30 meters) and shockproof without an external housing.

Fortunately, the Keymission is one of those 360 cameras that can be used without its app.   Whereas other 360 cameras require the app to stitch photos or videos, or to convert them into standard formats, the Keymission stitches photos and videos in-camera, in standard JPEG and MP4 formats.

Nonetheless, there are some default settings that you probably ought to change but the good thing is that you can change your Keymission’s settings on the desktop app if you’re having a hard time connecting the app.  Simply plug the Keymission into a USB port, then launch the Keymission 360/170 Utility.  Near the top, just below the main menus, you’ll see “Play,” “Edit,” and “Set.”  Click on Set.

You’ll see that you will be able to change the settings, as though you were editing them on the smartphone app. 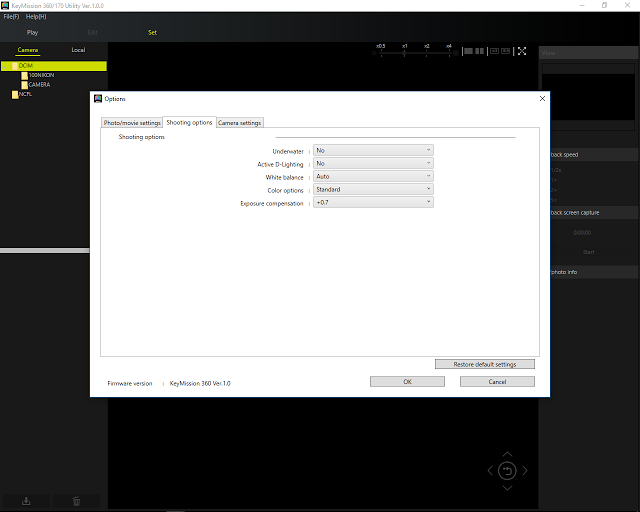 Here are some of the settings you should consider changing:
Photo / movie settings:
– change Movie Options to 1920/24p.  This makes videos into the standard equirectangular format with 2:1 ratio.
– Self-timer: I recommend changing it to 10 seconds.
Shooting options:
You should decide on whether you want Active D-lighting, which is Nikon’s way of underexposing intentionally to preserve highlights, then normalizing the exposure digitally during postprocessing.  The advantage of Active D-Lighting is better highlight detail, but there will be more shadow noise.

After making these changes to the settings, just disconnect the Keymission from your PC and you’re ready to shoot with the Keymission.  After shooting, you can download photos and videos either with the Micro SD cards, or connect the camera via USB to your PC.