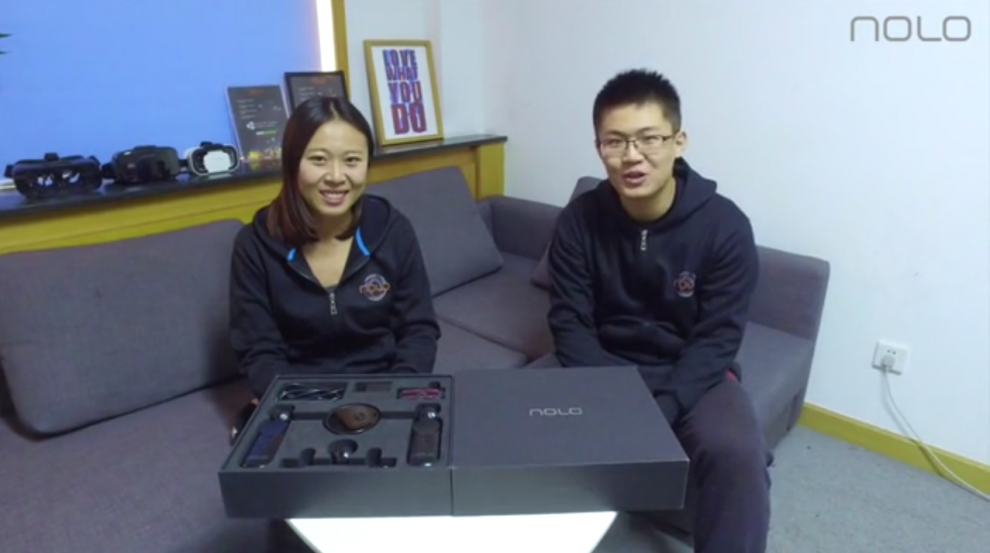 Nolo VR is an accessory kit that adds positional tracking with 6 degrees of freedom to mobile VR headsets such as Samsung Gear VR, Google Daydream, and even Google Cardboard.  There has been tremendous interest in Nolo VR, and when they launched on Kickstarter, they reached their campaign goal within just 8 hours.

Nolo VR has announced a stretch goal:  if they raise $200,000, they will develop wireless Steam VR gameplay.

Normally, HTC Vive and Oculus Rift headsets are tethered to a PC.  When using the headsets, users have to avoid being entangled with or tripping over the headset cable.  Most of the time, it’s not an issue, but there are some games that require a lot of moving around and the cable can decrease the sense of immersion.  That’s why wireless adapters for the HTC Vive are being developed by several companies.  The first wireless adapter that became available — the TPCast — was sold out within minutes.

Now Nolo VR might be able to provide wireless gameplay on Steam VR as well.  However, Nolo VR was careful to point out the limitations:

“How It Would Work
We would create a companion app for the Android smartphone that will allow you to transmit tracking data from the phone to the PC. Then, instead of plugging the headset marker to the PC directly, you would plug the headset marker to the smartphone. It would be the same as what you do for mobile VR.
Caveats
1. The wireless function of RiftCat only works with 5GHz network, and the performance may depend on the wi-fi condition.
2. Wireless transmission of the tracking data may add a little bit of latency compared to the wired option. We’ll work on minimizing it.”

I don’t expect that Nolo’s wireless system will be anywhere near as good as the latency-free TPCast, which is $249 by itself (plus the cost of the $799 HTC Vive), compared with Nolo VR ($99) but it’s good to at least have the option for it.

Nolo is currently available on Kickstarter, with delivery estimated for May 2017.  Please note crowdfunding is not the same as preordering — there can be delays and sometimes project cancellations.  I did back their project and will post a review if and when I receive it.