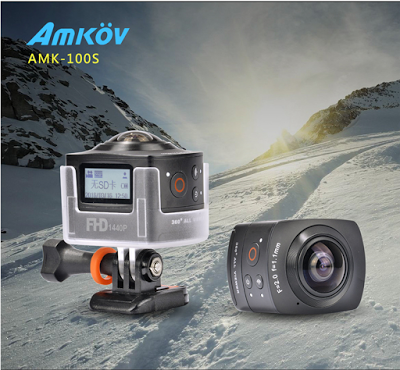 AMK100S is a low-cost hemispherical 360-degree camera from Amkov with high resolution video.  It is marketed as a sports camera and comes with a waterproof enclosure that works up to 30m.  Amkov also notes the small size and suggests usage as a drone camera. 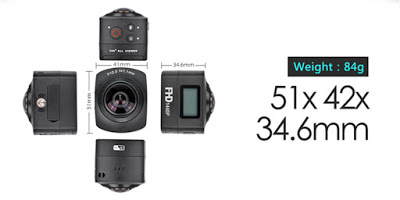 Although it looks similar to the X360, the AMK100S is actually a different camera.  Here are the key specs:
– 360 x 220 degrees.
– photo resolution: up to 3840 x 2160 (8mp CMOS sensor)
– video resolution: 1920 x 1440 at 30 fps, 1440 x 1080 at 30 fps.
– aperture: f/2.0
– uses Micro SD cards up to 32GB
– detachable battery (which means you can carry a spare).
– price: $130
Although the video resolution is nominally 2.7k, it is not clear what that resolution represents.  Normally, 360 degree cameras have a resolution that is 2:1 (for equirectangular view) or 1:1 (for a circular fisheye view).  The video resolutions specified are instead a 4:3 ratio, which I think may mean that the usable resolution is lower.  Unfortunately, there are no samples yet on their site.
One of the unique features of the camera is that it has a dedicated remote accessory that looks like a watch. 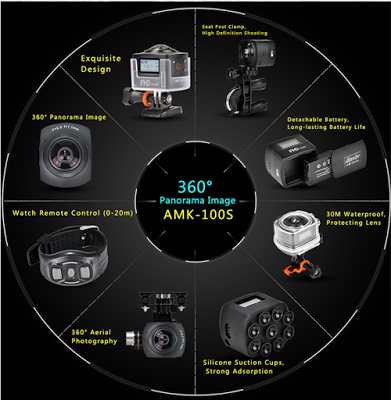 Official website here.  An English manual is available here.  It is available for preorder here.
Thanks to Mike Cane (of Atomic Supermen) for bringing this camera to my attention!

UPDATE: It appears that a rebranded version is being sold on Amazon, but at a much higher price.