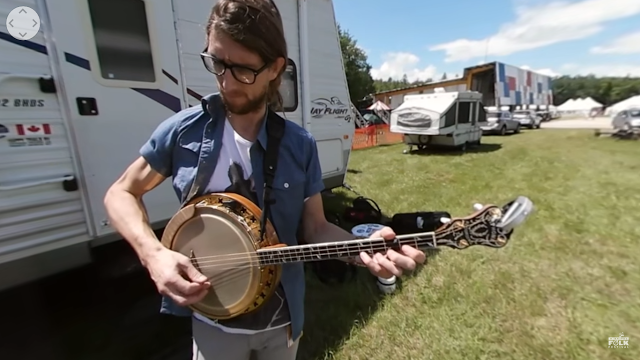 When using a 360 camera to record live music, there is nothing more important than the audio quality. Here are some tips for capturing high quality audio using a professional external microphone.

The Winnepeg Folk Festival has a session series where they take artists backstage at their festival and film them acoustically. This year, they decided to record a session using a 360 camera. For this video, they used a Samsung Gear 360 (reviewed here).

Here’s the video, featuring The East Pointers:
Although the Samsung Gear 360’s internal microphone has surprisingly good audio quality, you still need an external mic for high quality audio required for a 360 music video.I spoke to Winnepeg Folk Festival’s Terry Proveda about tips for recording high quality audio.Mic: Great video, Terry. I loved the music and the audio quality. Can you give some tips for using an external microphone with a 360 video?

Terry: There’s a few key take aways for filming live acoustic music in 360. First off, mic placement – in this session I had the guys stand around a Senheiser MD 421 cardioid dynamic mic, which was recording into a Zoom H6. Setting up the guys around the mic gave a nice balanced audio mix. The East Pointers decided to play an acoustic song so I only needed to mic their instruments, which made the shoot easier. I tried to hide the microphone by placing it right under the Samsung Gear 360, so the focus is on the artists and not on mics covering their instruments.Another thing to keep in mind shooting 360 is to make sure that anything you don’t want in the shot, to be completely hidden from the camera. I had 3 people including me hiding behind the trailer while the guys performed this song and had everyone out of sight before they started recording.

Mic: Can you tell me more about the editing process?
Terry: Once you have your the audio and video files you can load and sync them in your editing software like any other video. Just make sure your project is 3840×1920 if you are shooting 4k, or else you will have black circles at the top and bottom of the footage. Also, you can play with the audio in your editing program to get the sound you want, added bass etc.Mic: Thanks, Terry! This was very helpful!


Terry: Thanks man! Let me know if you need anything else.
If you’d like to find out more or ask Terry further questions, check out Winnepeg Folk Festival on Facebook. You can also check out The East Pointers here, and their album The Secret Victory, available on iTunes.

TECHNIQUE: Nikon Keymission 360 photos and videos looking too dark? Here’s what to do.
Hands-on review of the Insta360 Nano Mount tripod adapter
Comment