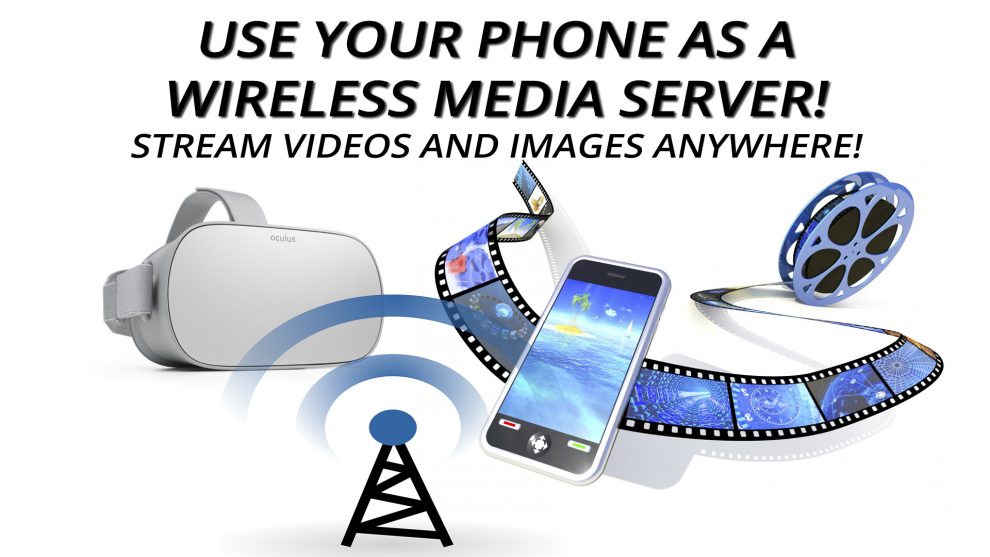 Oculus Go for the win!

Since the release of the Oculus Go last spring, a plethora of people are now experiencing the amazing world of VR.  Recently Ellen gave one to her entire studio audience and it seems Oculus has found a way to bring VR to the mainstream.  And for good reason; it’s portable, doesn’t require a beefy PC, and there’s no need to use your cell phone – it’s a truly all-in-one device.

Oculus Go for the fail…

The biggest (and only major) drawback in terms of media consumption is it’s lack of internal storage and no sd card support (although OTG connectivity is on the horizon). If you’re an insatiable consumer of media (as I certainly am), you’ll quickly find the 64bg of available memory is lacking, even more so if you opted for the 32gb variant.

So, what’s the best solution?

There is a simple and free solution to your woes though – use your cell phone as a wireless media server! It’s very likely you have an SD card already in your device, and if not, they’re getting cheaper with more capacity by the moment.  A 256gb microSD card can be had on Amazon for less than $60 these days, that’s plenty of room for a nice media library.  Setting up your phone as a dlna (Digital Living Network Alliance) media server is a snap.  With this standardized solution you can wireless stream media on your phone to several devices at once, most Android phones should support up to five concurrent connections (device and spec dependant). Obviously high end phones will perform better.

How to setup your phone as a dlna media server:

The first thing you’ll need is the dlna Server App on your Android (dlna Streamer for TV is a good option for iOS). The setup process is fairly straightforward, once you install the app, open it, add folders you’d like to share, and click the start icon. If you’re on a wifi network all devices on the network will be able to see the server.  If you’re not a wifi network, simply start your wifi hotspot on your phone and connect your devices to your phone.  Don’t fret, this won’t use any of your mobile data (it’s free).

Connecting you Go to your dlna server

There are several ways to do this and it’s easy-peasy, your media server will just automagically show up in most of your player apps. You’ll see it under network when browsing in Skybox, under DLNA servers in Pigasus and as a media option in Oculus Gallery.  Additionally, you can connect tablets and other phones to your spiffy new dlna server using apps such as VLC player (PC too, but that’s a bit convoluted).

If you’re looking for more helpful Oculus Go Videos, check out my video series: How To Get The Most Out Of Your Oculus Go!   In the series I cover everything from transferring files wirelessly to/from your Go and PC (and Cell phone), how to sideload regular android apps, Access hidden settings and much more!

I post useful videos like this regularly and am always happy to answer questions in the comments, so be sure to stop by!!!