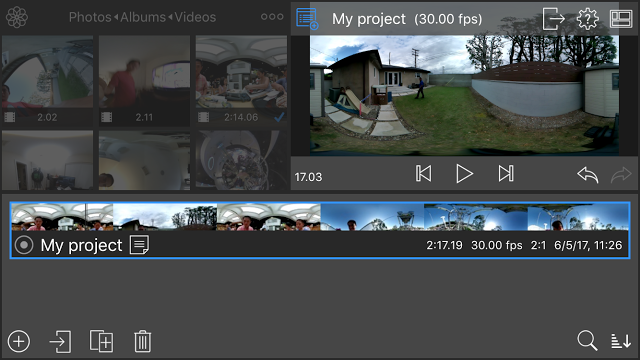 Do you want to be able to edit your 360 videos on your iPhone or iPad with a full-featured video editor?  Check out LumaFusion, which can not only trim 360 videos, but also add photos, transitions, titles and narration.
LumaFusion is a full featured video editor for iOS that supports up to 3 tracks for photos, videos, titles and graphics.  It also has 3 additional audio tracks for music, narration, and sound effects. It has editing tools such as color correction, slip-trim, keyframing for audio and video effects, and many, many more …. In short, the works.

LumaFusion has added 360 video support to enable you to edit your 360 videos on the road, in 2D 360, or 3D 360 (top-bottom or left-right).  To use it for 360 videos, you simply specify a 2:1 aspect ratio for 2D or 1:1 for top-bottom 3D 360.   You won’t be able to view your 360 video in 360 within the app, but you can edit it like any other video.  You can specify the bitrate, audio quality, and other options.  It will also add the correct 360 metadata for you.  Before rendering, you can see the final output size so you can make sure your iPhone or iPad has enough remaining space. 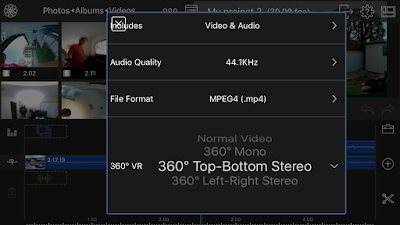 Here is a tutorial:
Here is a sample 360 video edited on LumaFusion by Sarah Jones (@virtualsarahj)
Here is the official page for LumaFusion.

Technique: using ND filters for 360 cameras
How to straighten or level the horizon in your 360 video using Adobe Premiere Pro CC
Comment