Here’s a tutorial for making a bullet time effect video using almost any camera or even a smartphone, with or without stabilization, 360 or not 360!

The bullet time effect first astounded audiences in the Matrix.   Later, Swiss freeskier Nicolas Vuignier created a similar effect using an iPhone attached by a string to a winged stabilizer, shooting at a high frame rate.  The effect became popular again because of Insta360’s ad campaign for the Insta360 ONE, which can shoot at a high frame rate and has built-in image stabilization so that you can swing it around with a string, without a stabilizer.  The ONE even includes a string for this effect.

The method I use works with any camera or phone, whether or not stabilized, and for both 360 and non-360 cameras.   Here’s the video tutorial:

Here are the things you’ll need for a bullet time effect:

1. Here’s the swivel adapter I used.  Gearbest used to have it as well, but it’s out of stock and according to my GB rep, they have no plans to restock it.
2. This monopod is similar to the one I used for my smartphone and GoPro Hero5.  The long one I used is the Kodak PIXPRO monopod.
3. This handle would work
4. Camera: The difference betweeen a 360 camera and a regular camera or smartphone is that the latter provide a fixed perpsective whereas a 360 camera can provide several points of view. And it’s ok if your camera doesn’t have a high frame rate — you can spin it more slowly.

GoPro Hero5 Black and many action cameras have a high frame rate mode.  Many smartphones do as well. For 360 cameras, here are some high speed cameras that work well for bullet time:

3. Attach the swivel mount to a handle with GoPro style mount.

Caution: Please check your surroundings.  You wouldn’t want to hurt anyone, nor would you want your camera to hit the wall or some precious artifact! 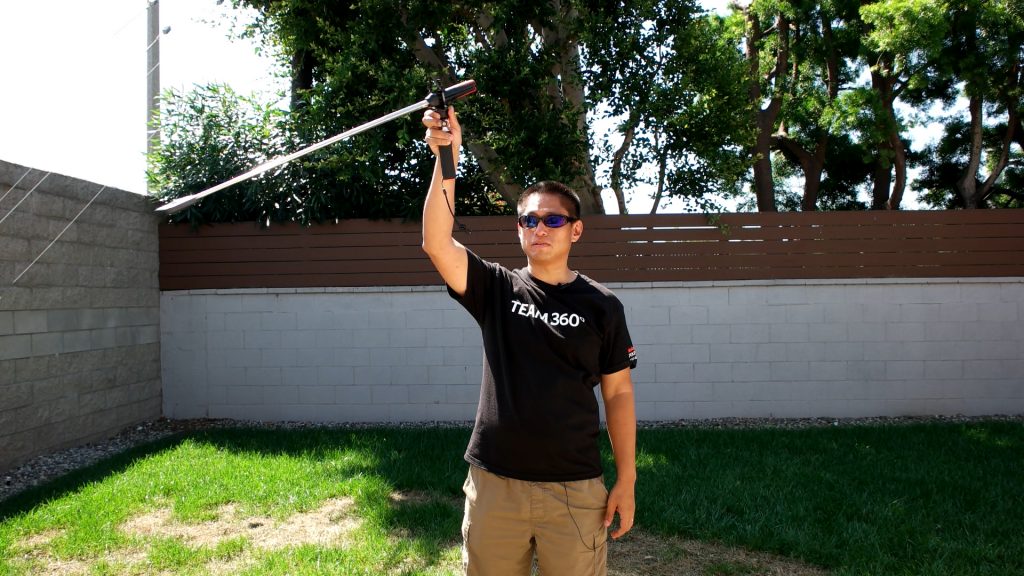 Before recording, switch to a high frame rate mode if available.  Begin recording and spin the monopod / selfie stick.  If you are shooting for slow motion, then as a reminder, the video will be much longer when played back at normal speed, so you don’t need to record such a long video.

If your camera doesn’t have a high frame rate mode, then spin it slowly.  Unlike the string or centriphone method, you don’t have to spin it fast to keep the camera aloft. 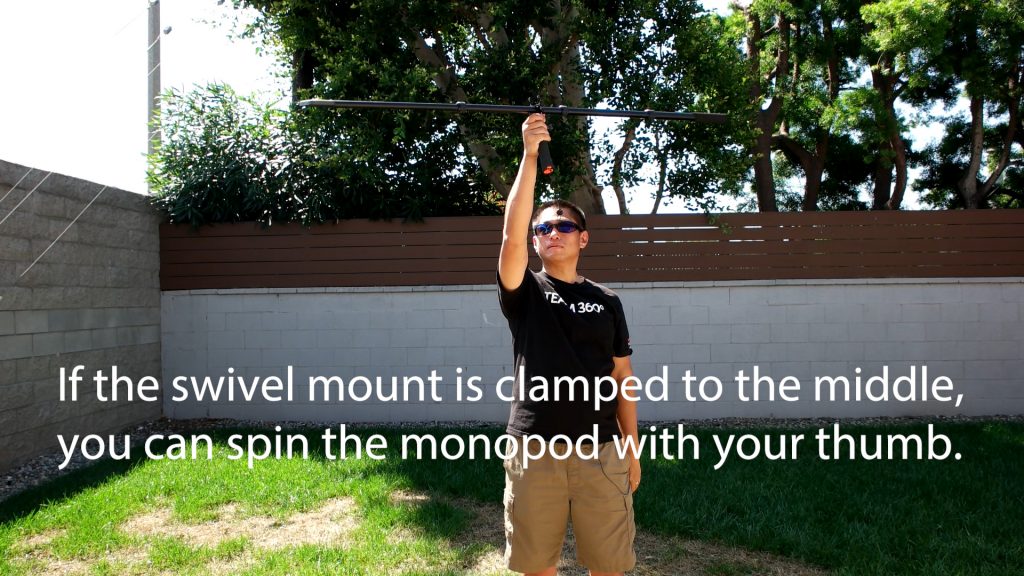 If you are using a stabilized 360 camera such as the Xiaomi Mi Sphere, you won’t actually need the stabilization for this kind of video, because the camera will be more or less level.  so you should disable the stabilization option if possible.

For a smartphone, action camera, or 360 camera used in non-360 mode, use almost any video editor with slow motion capability.  You can play back the video at 30fps, 24fps, or even 18fps.  If the editor provides a frame blending or similar option, you can probably get better results by using it.

For a 360 video, you will likely need to level the horizon first.  To do so, I use Adobe Premiere Pro’s VR Projection . Here is a tutorial.  After the horizon is leveled, you may need to move yourself to the middle of the video.  You can use the Offset effect to do that.  Finally, I would apply the slow motion effect.

What do you think of this technique?  Is it something you’d like to try?  Let me know in the comments!

Leave a Reply to A MatiKiri Cancel reply

How to add a 360 photo to a Facebook comment – two easy ways to do it!
Xiaomi Mijia Mi Sphere invisible selfie stick now available! How to get a discount
Comment