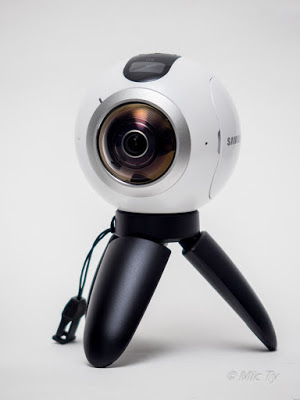 The Gear 360 is a pretty good 360 camera, and is currently the most affordable 4k 360 camera.  It has detailed photos, very good stitching (second only to the Ricoh Theta), with excellent resistance to chromatic aberration.  However, it is compatible only with Samsung S6 series, S7 series, and Note 5 and requires a PC to stitch the videos to get 4k resolution unless you have an S7.  Also, its photos become blurrier as the sensor warms up from use (blurgate).

Please note that this is the gray market import version which has no US warranty.  If you want the US version, you can get it here.

The Gear 360 ships free with Amazon Prime, but may take up to 5 business days to deliver instead of the usual 2 days.