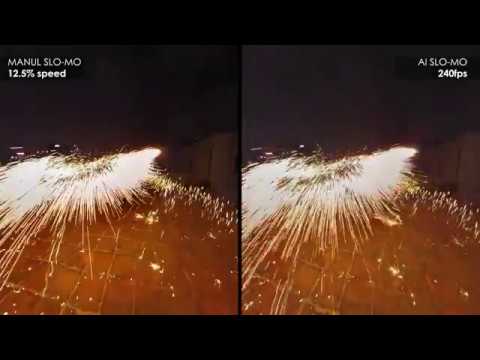 Kandao Qoocam and Obsidian will soon have 300fps super slow motion videos thanks to AI.  Here is a demo video:

The slow motion is achieved through interpolation, which is an old technique for turning regular video into super slow motion.  The two things that are different here are: first, Kandao is using machine learning and AI.  Kandao claims that it uses a neural network to predict the intermediate frames.  Second, although the interpolation is not perfect, the result is much higher quality than other interpolated slow motion that I’ve seen such as from Insta360 One X or from Adobe Premiere.

With this new feature, footage can be slowed down up to 1/10th speed, so that a 30fps video can be made to look like 300fps.  Qoocam has a 60fps mode that could in theory be used to create 600fps video, although Kandao hasn’t made that claim specifically.  Kandao did, however, use its new AI slow motion on a video shot at 4K 120fps on Obsidian S, and the result is a 4K 1200fps video:

The slow motion feature will be included in Kandao Studio v3.0, which will be released on April 23.

How to edit 360 photos to get the best quality from your 360 camera (UPDATED April 10, 2019)
Content-aware fill for 360 video (Tutorial by CreatorUp)
Comment