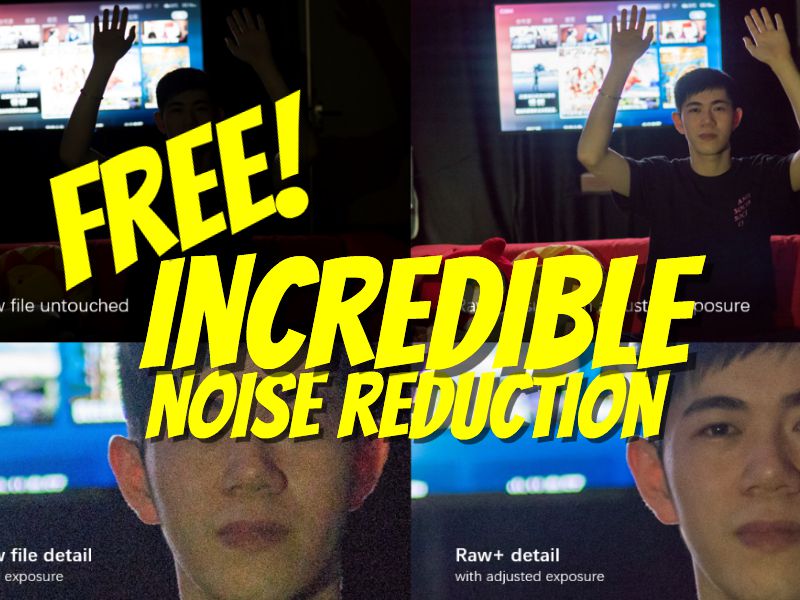 How would you like to get an ISO 1600 shot with less noise than an ISO 100 photo from the same camera?  This FREE software lets you do that with its an advanced type of image stacking that doesn’t require a tripod!  The software is called Kandao Raw+, and it works with 360 photos and non-360 photos (it is not limited to photos from Kandao cameras).

First, here’s a sample.  On the left side is an ISO 100 photo that was exposed for the highlights.  When the shadows were boosted in post processing, you can see there’s noise, as expected.  On the right is a shot at ISO 1600, also exposed for the highlights, and the shadows also boosted in post-processing.  As you can see the ISO 100 has more noise, and has motion blur.  The ISO 1600 shot has less noise and has no motion blur because it was shot at a higher shutter speed.  How was this possible?  Through Kandao’s Raw+ software, which uses an advanced type of image stacking.

Here is a view of the original file, and a closeup view:

Image stacking is a technique where you take multiple photos and then average them out to remove the noise.   You can use software such as Photoshop to do it.  However, for image stacking to work, the camera and subjects must be stationary.  Kandao’s software is unique because it enables you to use image stacking even handheld, and even if the subject is moving:

With Kandao Raw+, you can stack multiple raw photos (up to 16), and select a single image in the series, and the software will be able to filter out the noise by analyzing all the images in the series.  The result is a dramatic reduction in noise:

Update: Here is a video about this new software from my friend Hugh Hou from CreatorUp!

This technology has many uses, including an alternative way to do HDR, by exposing for the highlights and then boosting the shadows in post-processing.  Normally, doing this increases the noise in the shadows, but with Raw+, even the shadow areas will not have too much noise.  The advantage of this method compared to a traditional HDR with bracketing is that it can be shot handheld.

Kandao Raw+ is available for free download for Windows or Mac here.  Please note that the software only works with Raw files.  Besides Kandao’s own cameras, including Kandao Obsidian and the upcoming Kandao Qoocam, other 360 cameras that have Raw capability include the Xiaomi Mi Sphere, Insta360 One, and GoPro Fusion.  Thank you very much to JV Luna and Scott Pooler for bringing this to my attention! 😀

Rylo in-camera sharing: share 360 videos directly without downloading
Wrong-headed: this is the NOT a panoramic head for 360 photos!!!
Comment