Here is a list of twenty-seven 360 photo sharing apps and sites, including Lookabout, which is the newest one on the list.

Lookabout is a new 360 photo sharing app that aims to be like Instagram for 360 photos.  It is currently available only for iOS but an Android version is in the works.  You can download it from the iOS App Store for free. 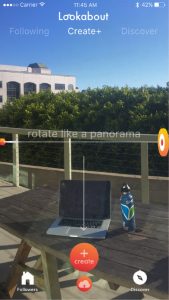 Thank you very much to Martin Smith of Roto Studios for bringing this to my attention!

1. Facebook (supports both photos and videos). Do you really need a description for this? Is it comfortable sleeping under that rock? 🙂

2. Google Streetview (Android; iOS; browser). Yes we all use Street View for its maps, but it is also a way of sharing 360-degree photos. In terms of exposure, your 360 photo will probably get more views on Street View than on any other platform (unless you already have many followers on that platform). However, Street View wasn’t designed as a social platform for 360 photos, so it’s missing some of the components that we expect from a social media platform such as likes or comments. It also has no real place for 360 photos of friends or family, unless there is a map location that you want to associate the photo with (probably wouldn’t want to upload photos of parties at your house).

3. Google Photos. (Android; iOS; browser). Google Photos will recognize 360 photos and videos and present them as such. As with Street View, it wasn’t designed as a social media platform, so it doesn’t have likes or comments. In fact, unless you share a photo with someone else (e.g. Facebook or Twitter), only you will see it.  I use Google Photos a lot, especially to upload photos to the cloud to save space on my phone.

5. Roundme (browser, Android, iOS).  Supports gigapixel resolutions.  Focused on virtual tours.  Pay once to post your virtual tour and you’ll be able to use it forever.

6. Flickr VR (browser; Gear VR). Flickr will automatically detect a 360 photo and enable a VR viewer, but this appears not fully implemented yet. It’s been “coming soon” for a year now, so don’t hold your breath. For now, you can post to and explore the Equirectangular group

10. Verpix (browser; supports both photos and videos). Has tracking statistics and a motion graph

11. 360 Cities (Android, browser, not sure if the iOS still exists; supports both photos and videos). Most of the 360 photos on appear to be high-resolution 360 panoramas captured with a panoramic head, as opposed to those taken by a 360-degree camera. Photos uploaded to 360 Cities can be licensed.

12. Presence VR (iOS; Android).  Thank you very much to Joey Cathey for adding this to the list!

13. Gala360app.com (Android; Google Daydream; Gear VR; supports 3D 360).  Thank you very much to John Holt for adding this to the list!  John says the list is carefully curated, so it’s intended only for your best work.  John also said they give out $360 prizes from time to time for excellent pano sets.

14. VRapp.co (browser; supports photos and videos).  Thank you very much to Frederic Sidler for adding this to the list!

15. 360player.io (browser).  360player.io is different from the other options here.  It is not so much a photo sharing service per se, but a way to host 360 photos and embed them in your webpage.  In that regard, it is somewhat similar to Google’s VR View but simplifies the process.  Thank you very much to Etienne Leroy of V360 video editing app for adding this to the list.

18. Kolivri (supports both photos and videos).  A big thank you to Bruno Devolder for adding InPatium, Vizor,io and Kolivri to the list!

19. Panotica (browser).  Thanks to Radek for adding this to the list!

20. Mapillary (browser).  This is similar to Google Maps, but is open source. Thank you very much to Adam D for adding this to the list!

21. Lookabout (iOS). You just read about it. Are you and your clownfish friend looking for your family…? 🙂

Many camera manufacturers have their own photo sharing platforms for their clients, including:

Do you know of any other platforms that I missed (Photosynth is now closed)? Please post in the comments!  One open challenge I have for all these platforms: to date, I haven’t found a platform for sharing 3D 360 photos for Cardboard (as opposed to Gear VR).  If you can add that, you would instantly be able to set yourself apart from the other platforms on this list.  Just sayin…