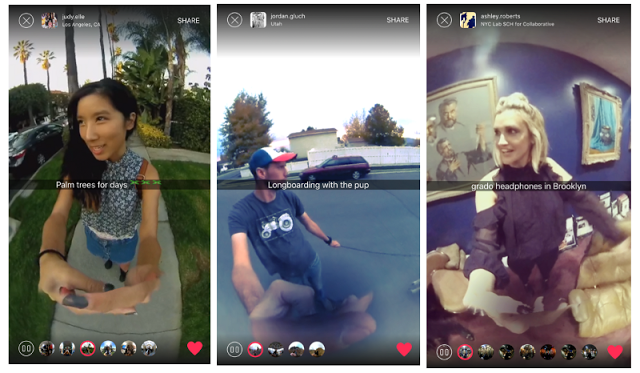 Pie is a newly-launched social app on the iPhone for sharing short 360 videos (10 secs. or less) and panoramic ‘slices’ of time, and it works with or without a 360 camera.  Whereas other 360 sharing apps emphasize its 360 photos or videos, Pie keeps its focus on people.

Instead of trying to create a large library of 360 videos like YouTube, Pie is designed as a way of communicating with your friends and followers and sharing with them brief moments from your life.  It’s more about the people in the video rather than the video itself.

Because the emphasis is on connectedness and sharing your life, it presents videos for viewing on a smartphone in vertical format which allows you to get a closer look at people.  There is no horizontal view or Google Cardboard view.  The app also makes no attempt at trying to maintain fidelity.  Captions are emblazoned across the video with emojis, and users are encouraged to employ Instagram-like filters.

CAPTURING SLICES
You can share videos on Pie from 3 sources:

The Nano is perfect for this format because it’s compact, affordable, and has very good quality video for its class.

3. Pie slice: you can also share slices of time using your smartphone to capture panoramas with motion.  You hit the record button and rotate the phone as you would when capturing a panorama, ideally with motion in it, such as people dancing around.  On playback, the panorama will come to life as you swipe it, moving forward or backward in time.

Pie is currently available for the iPhone on the App Store.  No word yet on an Android version.

Thank you very much to reader Pepe Vazquez for bringing this to my attention!