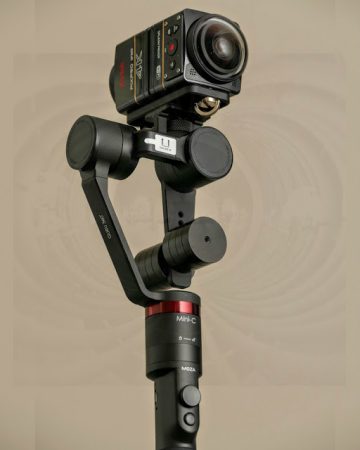 The Guru 360 is here!  It’s the world’s first affordable stabilized gimbal designed specifically for 360 cameras!  I was very impressed with the preproduction version that I tested a couple of months ago, and now the release version is here.

FEATURES
360 videos need a level horizon to be comfortable to watch.  If the horizon is not level, then the video will seem to move in a different direction from the direction where one looks (or swipes), which can be disorienting and even nauseating.

A 3-axis stabilized gimbal can keep the horizon level as a camera moves.  However, conventional gimbals have pitch and roll motors that often block a large part of the 360 camera’s field of view.

The Guru 360 is the first affordable 3-axis stabilized gimbal designed for 360 cameras.  Its motors are almost coplanar and placed below the 360 camera, thus giving a 360 camera an unobstructed field of view, and giving the gimbal a narrow profile (at the nadir): 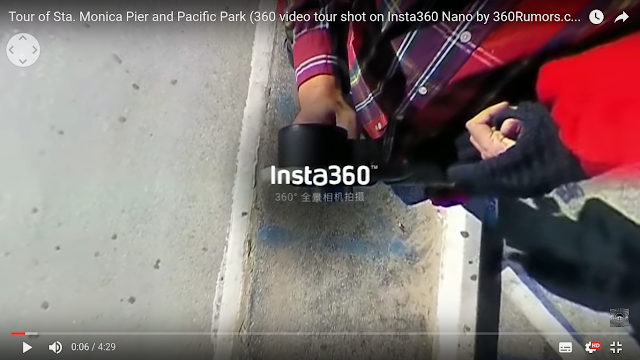 Compared to other 360 gimbals currently on the market, the Guru 360 is smaller, easier to carry, and is actually affordable to consumers.

Another advantage of the Guru 360 is that it is modular and its parts are interchangeable with those of the other gimbals in the Moza family, including this wearable mount: 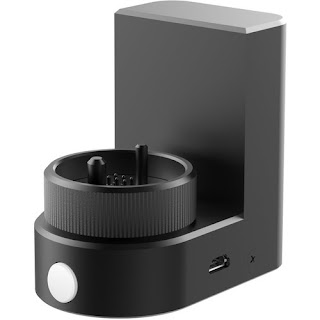 COMPATIBILITY
The Guru 360 is compatible with 360 cameras up to 250 grams.  This is only a guideline, and the camera’s weight distribution is also an important factor.  For example, I was able to use the Guru 360 with the Vuze 3D 360 camera, despite it being about 450 grams because it has a low center of gravity and has a flat and very regular shape.

Here are cameras that I’ve successfully tested with the Guru 360:

I will be testing other cameras as well.

*These items differ from the preproduction version.

HOW TO SETUP
When setting up the Guru 360, you need to confirm that the gimbal is correctly positioned.  There’s a sticker that tells you which way should be ‘up’. 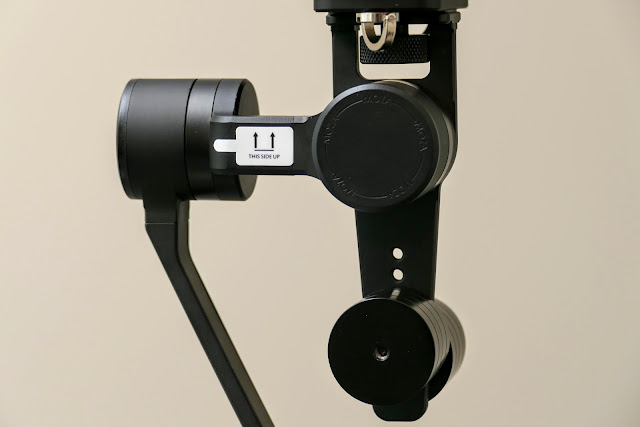 You then attach the 360 camera to the Guru 360.  I prefer to have the lenses facing toward the same axis as the counterweights, instead of perpendicular to them.  The counterweights are closer to the camera and will be less visible than the roll motor, which would instead be hidden within the stitch line of the camera.

Finally, you need to balance the 360 camera using the counterweights.  Balancing the 360 camera will conserve your battery life and improve the performance of the Guru 360. 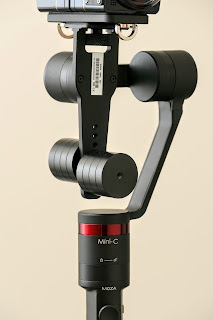 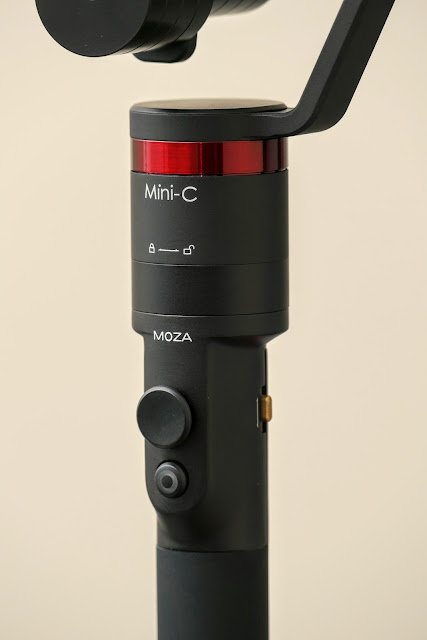 Using the Guru 360 is simple. You simply hold down the power button to turn it on or off.  The joystick controls the yaw and the pitch.  As with other gimbals, you should not release the handle, or else the handle will spin wildly.

Lock modes: You can also the press the joystick.  If you hold it down for about 3 seconds, it will stabilize all three axes, keeping the horizon level and keeping the camera pointed constantly in the same direction.  This is the most useful mode for 360 cameras.  I like to keep the camera pointed so that the sun is along the stitch line, which will keep the exposure and contrast even on both sides of the camera.

If you press the joystick once, it will stabilize pitch and roll, but leave the yaw for you to control (with some dampening), so that you can control the direction in which the camera is facing.  This is for shots where you want to to track a subject moving around (instead of doing it electronically in post).

If you press the joystick twice, it will stabilize the roll, and then dampen the yaw and pitch, which you will control.  This mode is not recommended for 360 cameras.

Inverted mode:   If you lower the angle of your grip even further, then the camera will flip to inverted mode.  I haven’t tried it with a drone (I don’t have a drone anymore).

Here is a video showing the Guru 360 being used with the Vuze in upright and in inverted modes:


As you can see, the Guru 360 does a great job of keeping the horizon level and made the video watchable even with me walking around.  I plan to take more sample videos and will post a comparison with a non-stabilized camera.


SUMMARY
Here is my opinion on the strengths and weaknesses of the Guru 360:

Weaknesses
– cannot be used with heavier 360 cameras or rigs
– no “flashlight” mode (handle cannot be held horizontally)
– after holding it a while, the gimbal can start to feel heavy
– motor may be audible in the video
– app works only in iOS for now

In summary, the Guru 360 is a very useful peripheral for 360 videos — practically a necessity for moving shots, especially if intended for viewing on a VR headset.  Its strengths far outweigh its weaknesses, particularly when you consider its price.  I therefore highly recommend the Guru 360 for anyone who uses a compatible 360 camera.  If you would like to order the Guru 360, it is available from Gimbal Guru for $299.