Ricoh’s TM-1 monopod, with special features for 360 cameras, is now available in the US. Ricoh is also releasing a selfie stick accessory for the Theta V. 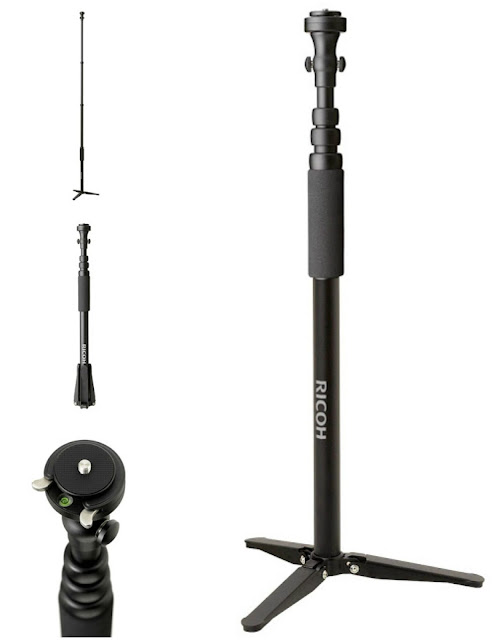 Last year, Theta released a monopod with special features for 360 cameras called the TM-1.  The TM-1 has several unique features:
– maximum length of 67 inches, one of the longest monopods I have (the same height / length as the Kodak monopod).
– can extend or collapse with one push of a button, making it fast to deploy or collapse.
– has a quick release plate, making it possible to attach or detach a 360 camera quickly.
– built-in legs that fold into the body.
– the short tripod legs will have a small profile in the photo.
The TM-1 had been available only in Japan but is now available in the US through Ricoh’s website for $199.
Ricoh also released a selfie stick accessory for the Theta V ($49).  This one looks less innovative, unless the picture on the B&H website is just a placeholder.  From the picture on B&H, it looks like a rebranded version of the Fat Cat monopod ($10) or Smatree Smapole. 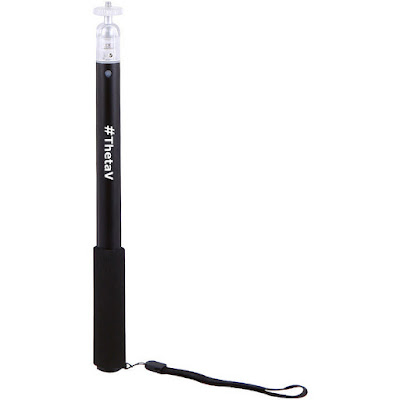 According to the specifications, it extends from 11 inches to 36 inches.  It includes a Bluetooth remote (not shown) and mini tripod (also not shown).   The Bluetooth remote is a first for the Ricoh Theta series and could make it easy to trigger the Theta V without a phone (I’m assuming that the Theta V can automatically connect to the remote after you turn on the remote).  Previous versions of the Theta did not have Bluetooth.