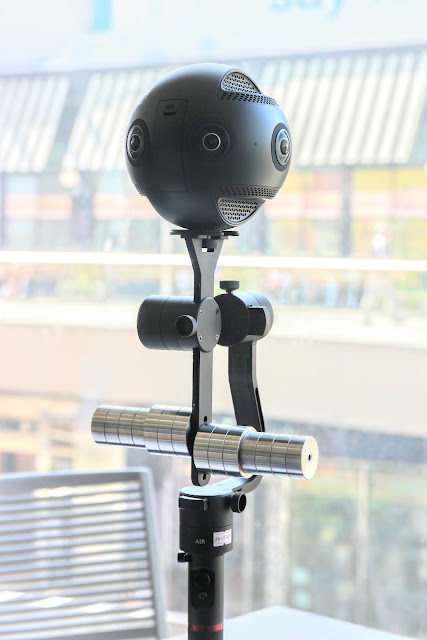 The Insta360 Pro is a very popular professional 360 camera that can, among other options, shoot at 8K in 2D 360 or 6K in 3D 360.  It has many features, including built-in gyro-based image stabilization.  However, that stabilization feature has a few limits.  First, when there is a lot of camera movement, the video can appear slightly blurred.  Another issue is that the stabilization only works for 2D 360 modes.

One alternative to using the gyro-based stabilization is to use the Moza Air 360 gimbal, which, to my knowledge, is the most affordable heavy-duty gimbal designed for professional 360 cameras such as the Z Cam S1 and S1 Pro, and now the Insta360 Pro.

I had the chance to use a prototype of the Moza Air 360 gimbal while shooting with my friends from GimbalGuru, Devlin and Yu, and with VR journalist and editor Sarah Redohl of ImmersiveShooter at Santa Monica Place and Third Street Promenade.  Here is the 360 video, originally shot in 6K 3D 360, but rendered in 4K 3D 360 to facilitate editing:


The Insta360 Pro performed flawlessly, with two exceptions: first, the stitching at the areas near the nadir had a ‘wavy’ effect as noted in my Insta360 Pro review. The waviness in the nadir is a known in issue and will be fixed via firmware update soon.  Second, the audio with the in-camera microphones doesn’t seem to be very clear.  Note: The fan, which can be loud, could not be heard on the in-camera microphone in this environment.

In terms of performance, as you can see from the video, the Moza Air 360 was able to keep the Insta360 Pro level as I walked around.  It looks like a very promising and useful accessory for the Insta360 Pro.  I look forward to the release version.

The Moza Air 360 is available for preorder here.  If you want to buy Insta360 Pro, please contact me via the contact form in the nav bar (under About) or Facebook.com/360rumors so I can help you get an exclusive deal.  Or if you are in a hurry, you can get it through Amazon or B&H Photo.